Only a few years ago, automation was somewhat scarce within much of the manufacturing operations at GN Corporations Inc., in Airdrie, AB. But the shop, driven by a strong forward-thinking attitude of continuous improvement, recently made a strategic automation leap to further increase productivity and ensure its global competitiveness well into the future.

GN services the oil and gas industry with equipment precision machined to customer specifications. It also produces its own line of standard products for the sector. The fluctuations and intense competition within this industry can be a real challenge, says John Pleša, president and CEO of GN Corporations Inc.

“Competing in North America is challenging, but when done on a global scale, shops start pitting themselves up against low-cost manufacturing countries such as China, India and Mexico. And, when doing so, a shop had better be 20 to 30 per cent more productive than the rest of the world,” warns Pleša. “This will allow a shop to compete when it comes to delivery times. However, they still have to beat out the competition on price. For us, automation has proven a major factor in achieving both of those critical objectives.”

At the heart of GN’s machining operations are about 60 Mazak machine tools. Of those, 14 are new and part of two completely automated machining cells GN refers to as its “Pioneer” and its “Frontier” lines.

The two cells–each consisting of multi-tasking machine technology and stand-alone robotics–have helped boost part consistency and increase production output significantly. As a result, GN competes within, and quickly adjusts, to the challenging and ever-fluctuating North American and global oil and gas industry sectors. 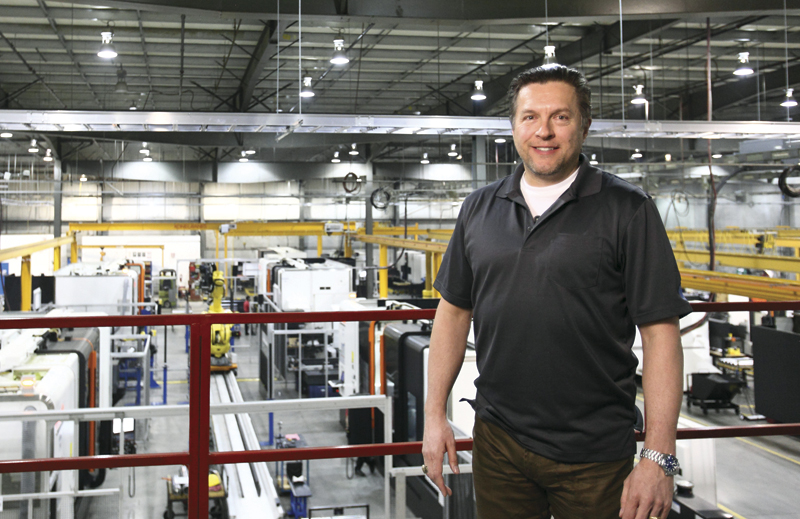 Other Mazak machines at GN include Quick Turn Nexus 450-II MY multi-tasking machines with live milling spindles and Y axis machining capabilities, Integrex i-400ST multi-tasking machines, each with two turning spindles and lower turrets, and a Mazak Cybertech Turn 5500 with a 381 mm (15 in.) spindle bore and maximum part diameter machining capacity of 813 mm (32 in.).

“Much like us, Mazak continuously evolves,” says Pleša. “They’ve advanced from simple two axis lathes and three axis milling machines into multi-tasking machines, automation and digital connectivity. One of the key features that sold us on the Mazaks is that the machine technology easily integrates with automation.”

All the parts GN machines play a critical role while in use, so much so that any part failure can lead to catastrophic outcomes in the field. That’s why the shop operates under a “zero defects” initiative because there can be no bad parts. And according to Pleša, automation provides the processing consistency necessary to maintain such an initiative.

“For us, it is not about the number of parts going out the door, per se,” says Rathnayake. “Instead, our goal is to meet the specifications set for each and every one of the parts we produce. We calculate and determine all aspects of a job–from cost per part to tolerances and machining processes. And fulfilling all those set requirements ultimately results in parts produced and delivered in the shortest amount of time possible.”

GN marks and tracks every component from start to finish. Any defects can then be traced quickly back to who manufactured the part, measured it, crated it and even shipped it–all down to the day and time to ensure the error never happens again.

Both the Pioneer and Frontier cells improve upon part setup and cycle times while also providing additional lights-out production capacity. But what is most critical for the shop is that the cells eliminate any necessary human intervention within the process, which diminishes the chance for errors and deviation from one part to the next.

“Pioneering” a new manufacturing approach
GN gave the Pioneer cell its name mainly because it is a completely new approach to manufacturing oil and gas industry equipment. The cell was also the company’s first venture into a major automation project.

The four Mazaks in the Pioneer cell double GN’s production capability by providing the output of eight of the shop’s other non-automated machines running 24/7. This cell also reduces labour requirements by 75 per cent. The Pioneer operates three shifts, five days a week and typically for eight hours or more at a time without any human intervention.

All the necessary machining, gauging/quality control (QC) and deburring of parts happens within the Pioneer cell. Because the four Mazaks are multi-tasking machines, they allow GN to complete the parts in one setup and two operations. Plus, if needed, the shop can quickly and easily switch the whole cell over to run a different family of parts.

Adam Jarantowski, head of manufacturing and the lead in the Pioneer line project, says it was a challenge to automate the particular part processing operations of the cell–mainly because the parts and the machining they require are very complex. 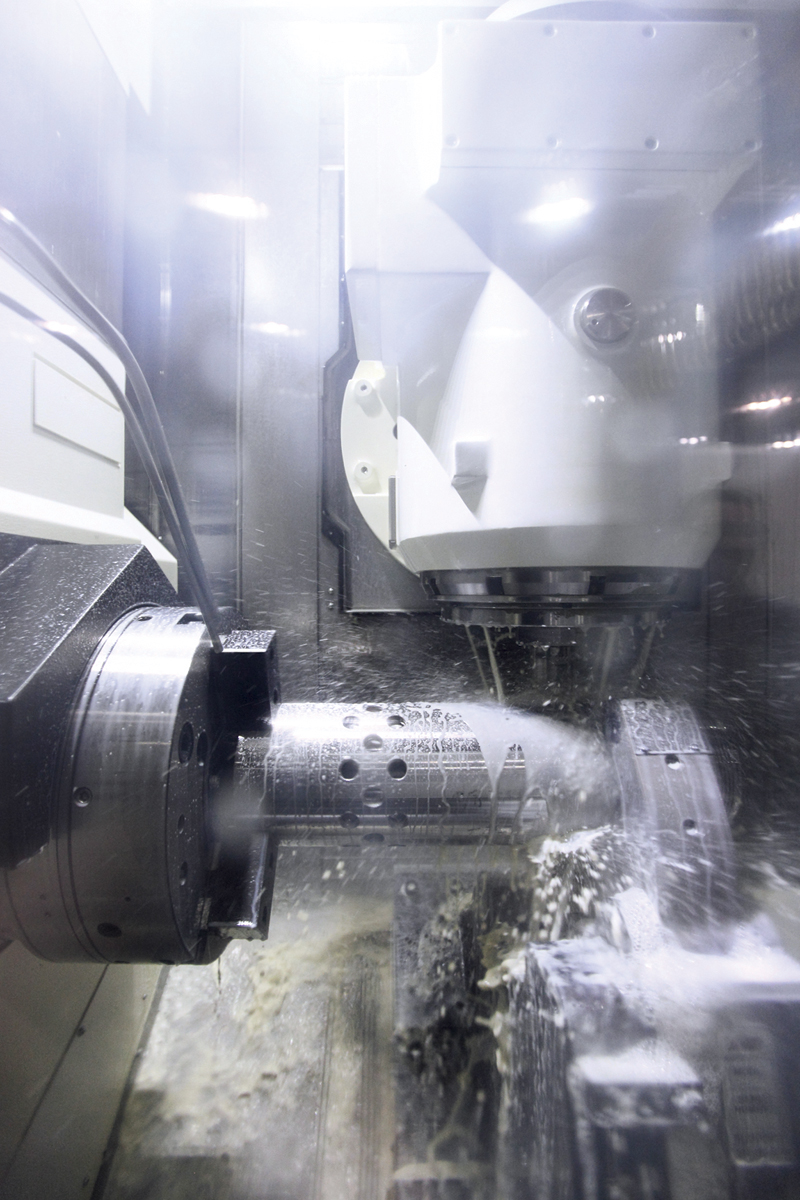 “To automate the processes and machine parts in as few operations as possible definitely required multi-tasking machines,” explains Jarantowski. “Without the Mazaks, producing the parts would require a lot more than just four machines as well as several additional operations.”

Pioneer uses two Fanuc robots. One, with a 600 kg capacity, rides on a rail to load and unload the Mazak machines, while the other, a smaller one, works at the part gauging station. An in-line CMM measures parts and feeds the resulting data into the machine tools for on-the-fly offset adjustments, and completed parts from the cell are 100 per cent inspected.

Currently, Pioneer processes 4140 heat-treated steel parts that require two operations and two machines; so two parts are completed simultaneously. The cell runs a specific family of parts, and each of the Mazak machines is capable of running any of those variations.

Because GN opted for 160-tool magazines on its Integrex e-500s, the shop can load each machine with at least three sets of the same tooling, as well as accommodate boring bars up to 610 mm (24 in.) long for part diameters as big as 902 mm (35.5 in.). Redundant tooling allows the cell to run continuous and lights out. Operators are also able to replace worn tools at the back of the machine without interrupting cell operations.

GN uses a presetter and radio frequency identification (RFID) chips/tags for all the Pioneer cell’s tooling. Once a tool is set, its particular information is stored in the tag that the Mazak machines read and use to automatically make the necessary offset adjustments. So, cell production never misses a beat, according to Jarantowski.

Alex David, manufacturing associate at GN, heads the company’s Frontier cell and says the key to its success is the ability to complete parts in single setups on the Mazaks. The cell runs 24/7 and, for the most part, unmanned with one operator that keeps it supplied with raw material.

Like the Pioneer cell, GN’s fully automated Frontier line also relies on Mazak multi-tasking machine technology. The Frontier name represents its use of special first-of-its-kind multiple-part-loading robot automation. Each of the Integrex i-200STs has its own robot that loads and unloads parts and moves them to a CMM for in-process gauging.

The cell’s CMM provides the Mazaks with in-process offset information and checks parts once they are completed. If parts are out of tolerance, they move to quality control for evaluation to determine the cause.

Juan Roubaud, plant manager at the company, credits Pleša with further strengthening GN’s drive in continuous improvement, especially in regards to advanced manufacturing technology. Roubaud, who has been with GN more than 13 years, says the parts have, over the years, become much more complex. Processing them on standalone turning centres and milling machines has become inefficient and makes for extremely long turnaround times, which, in the spirit of continuous improvement, is why GN first incorporated multi-tasking machine technology. And now, according to Roubaud, continuous improvement is the catalyst to the company’s push for increased automation.

Both Pleša and Roubaud agree that automation, such as that of the Pioneer and Frontier lines, is the next generation of manufacturing. And for GN, Mazak is, and will continue to be, a strategic supplier.

“Our relationship with Mazak goes back over 20 years,” says Pleša, “and they are an integral factor in the success of GN not only as a partner in machine tool technology but also in automation. And many machine tool suppliers these days tend to fall short in that capacity.” SMT