Total exports rose 0.6% to $64.3 billion, while imports climbed 1.9% to $62.8 billion. The increase in both exports and imports was entirely due to higher prices, as real exports and real imports were down 2.1% and 0.4%, respectively.

“Although the report was disappointing, the slowdown in export activity is likely to be temporary. Higher commodity prices should provide a boost to commodity-based exports, while a further easing in supply chain disruptions should support exports of manufactured goods,” commented Alan Arcand, chief economist, Canadian Manufacturers & Exporters.

With imports outpacing exports, Canada’s merchandise trade surplus narrowed for the third straight month from $2.3 billion in March to $1.5 billion in April.

“Breaking these data down, our trade surplus with the U.S. narrowed from a record high of $12.2 billion in March to $11.6 billion in April. At the same time, our trade deficit with the rest of the world widened slightly from $9.9 billion to $10.1 billion,” Arcand pointed out. 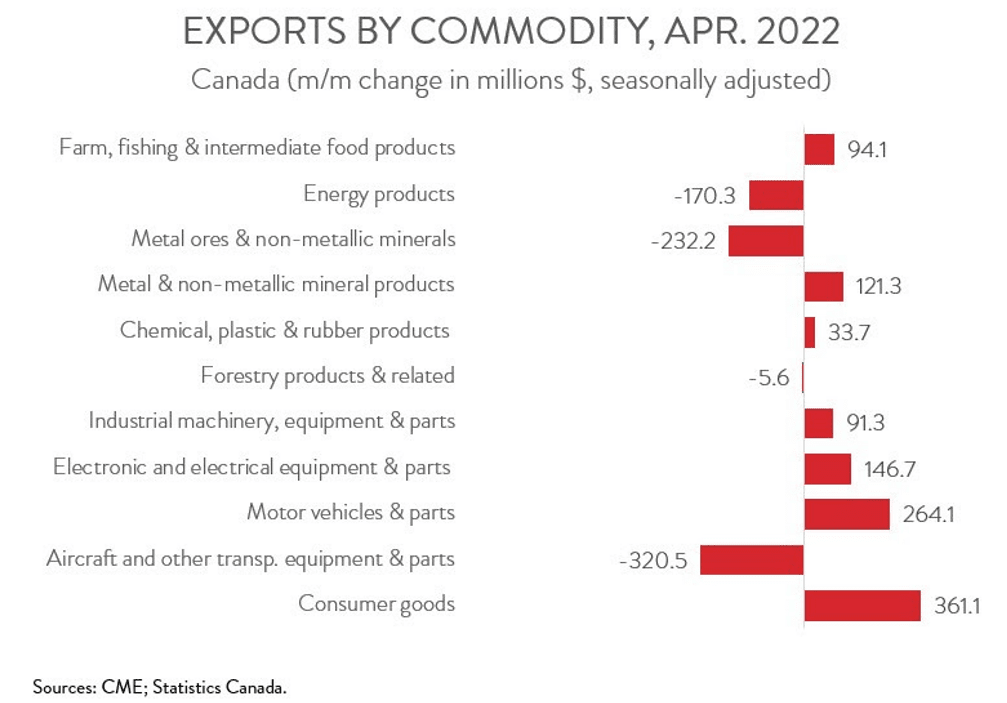 The increase in exports spanned 7 of 11 product categories. Exports of consumer goods rose 5.0% to $7.5 billion in April, building on the 5.3% gain in March.

Exports of motor vehicles and parts climbed 3.9% to $7.1 billion in April, the highest level since October 2020 and the sixth increase in seven months. This is yet another positive sign that semiconductor shortages are continuing to ease for the auto sector.

On the negative side, exports of aircraft and other transportation equipment and parts nosedived 16.9% to $1.6 billion in April. In particular, aircraft exports fell steeply, mainly due to lower exports of business aircraft.

Exports to the U.S. climbed 2.1% to $50.4 billion in April, up for the fourth month in a row. On the other hand, exports to the rest of the world fell 4.7% to $13.9 billion, the first decline in three months. Among Canada’s major non-U.S. trading partners, only exports to Mexico were up, while exports to the U.K., the EU, South Korea, China, and Japan were down.