A Question of Control

Automation in machining has begun to reach the point where the capabilities of machine controls are less and less distinguishable from artificial intelligence. And features that enter the market as high end nice-to-haves seem to become table stakes more and more quickly.

This can be seen in the development of collision avoidance systems. A major innovation when it first appeared on the scene in the last decade, collision avoidance has reached the point where major control vendors such as Heidenhain, Okuma, Fanuc, Fagor and others offer their own variants, either as a core feature of CNC control systems or as an add-on. As a few examples, Heidenhain has Dynamic Collision Monitoring, Fanuc’s iHMI interface has collision avoidance and Fagor Automation has the Fagor Collision Avoidance System (FCAS).

“Our Dynamic Collision Monitoring is based on machine kinematics, which is very important – because if you don’t know the exact work envelope or the exact size and inside space of your machine tool, you might run into a collision, specifically in five axis applications,” says Gisbert Ledvon, TNC business development manager for Heidenhain. 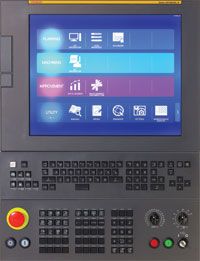 DCM allows the operator to monitor the machine tool, the fixture and the end part, making sure that there’s no collision when they do a dry run on the control or when a machining program is simulated.

“Collision avoidance systems are becoming very popular now,” says Harsh Bibra, general manager, North America, Fagor Automation Corp. Fagor’s FCAS has been on the market for about a year now, and Bibra says it could be considered as a form of artificial intelligence.

“We basically take a file of the machine and embed that into the control. The control knows there’s a zone where it can’t go, so the machine can cut at the highest possible feed rate without colliding with anything. It shows an envelope on the screen, and if it enters that zone it will sound an alarm or pause or stop—or whatever you’ve asked the control to do under those circumstances.” Bibra says that this form of collision avoidance is especially helpful in additive manufacturing applications.

Ledvon observes that many customers will actually ‘dumb down’ their equipment purchases to adjust to what they feel operators will be able to handle in terms of complexity. This directly impacts the quality and efficiency of the work they do. 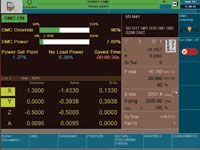 “In effect they’re not buying the right machine for the application—they tend to buy the machine according to what they feel the operator can operate.”

“With voice recognition you could buy the machine that’s right for the application,” he says. “You don’t have to make any compromises anymore because now the operator doesn’t have to learn a new control. You can use the same words, change the tool, set up the part, pick up the part… whatever it is— without going to another control. That’s a benefit I could see for the end user.” 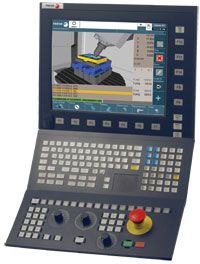 High ambient noise levels on the shop floor environment continue to present the main obstacle to the application of voice recognition to CNC controls. But other elements of the human-machine interface in CNC controls continue to benefit from advances in automation.

Fanuc’s Intelligent Human Machine Interface (iHMI) is one response to the continuing demand for more sophistication and functionality in CNC controls. “iHMI not only has the standard screens that operators are used to, but also areas to do planning, for tool management, for cycle time estimation,” says Fanuc district account manager Ed Halim. “The user can access additional pages in the system to execute collision avoidance, to collect data about machine uptime and downtime, to manage maintenance – and also to access electronic manuals and instruction sets right on the machine.”

The main screen is divided into different sections and the operator can go directly to whatever section they want to use or navigate through a menu with additional items that can be selected by the operator. “The user interface is becoming more and more powerful,” Bibra says. “People want to customize the user interface to their specific needs, and most of the machine builders want the machine to have their own identity—and that identity must reflect from the control interface. This is the trend.” 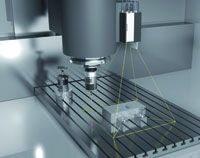 For Bibra the big task for CNC control manufacturers is to get tools into the hands of the machine builders so they can customize the front-end interface and also integrate disparate systems into the machine. As one example, Fagor worked with a U.S. Navy client to integrate infrared cameras to monitor the temperature of metal as it was being deposited during additive manufacturing. “That requires a lot of power or hardware capability, so you need a front end where you can customize the screen and have all the parameters the customer wants. From there you can manipulate all this information and send it to the control back end where you have your algorithms for high-speed machining, where everything is executed.”

Another example is a Canadian aerospace company that wanted to integrate printers, scanners and advanced Industrial Internet of Things (IIoT) software.

“That software is very CPU intensive. It needs a lot of processing power, and you need to separate that processing power from the back end of the CNC because you want the CNC to do its job. If somebody’s collecting a lot of data from the front end of the CNC, you don’t want that to slow the CNC down, so you need a front end which is very powerful.

“You have all these new things—cameras, scanners, printers—being introduced into the machine tool environment. CNC controls are becoming very data heavy. These things are so interconnected now,” says Bibra.

The bottom line: CNC controls can help ease the transition into smarter machining automation technologies, something that can help manufacturers remain competitive. SMT