It’s not an easy time for suppliers to Canada’s energy sector. As oil prices remain depressed, some of Canada’s largest companies continue to shed jobs, shut down or scale back extraction projects, and press suppliers for efficiencies and cost reductions. But in spite of it all, some companies continue to do profitable business in the energy sector, even if they aren’t growing the way they were a couple of years ago. 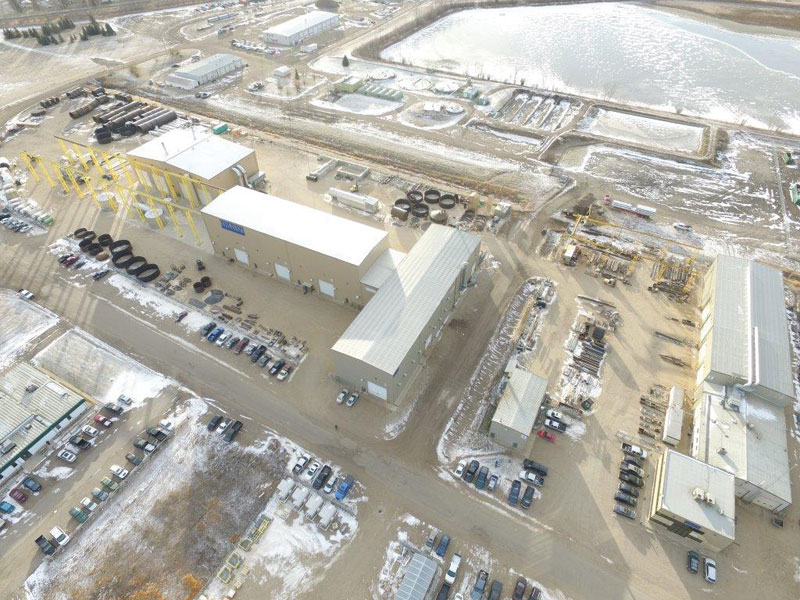 Custom work is central to Bilton’s approach. “A lot of our competitors also call themselves ‘custom,’” says Jason Greene, VP, sales and marketing. “We’re different because we don’t have a standard set of products. We rarely build the same thing twice. When clients tell us what they want, we don’t pull product Y off the shelf and that’s what they get. We give them what they want, exactly what they ask for.” 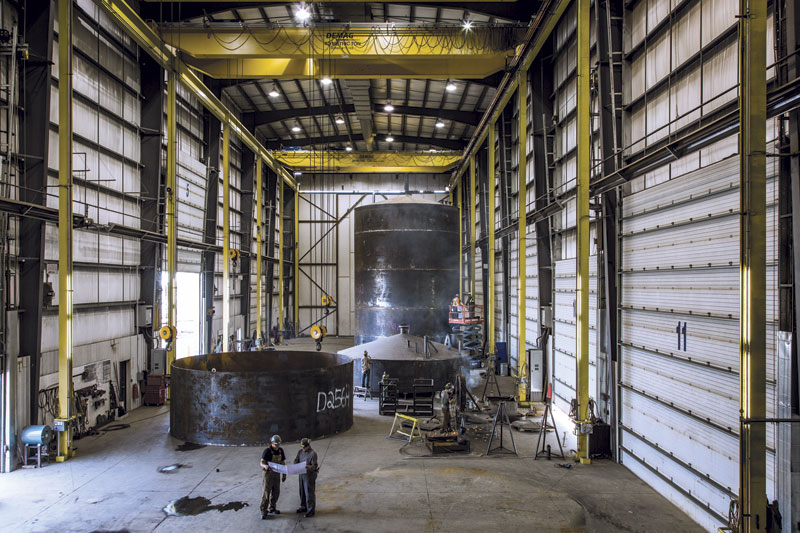 Typically, Bilton launches a customer engagement by taking its cue from the customer’s problem. “The customer might want to remove liquid from oil or gas, or maybe the gas is sour and they need to remove H2S [hydrogen sulfide]. We employ our team of process and mechanical engineers to put together a solution.”

In addition to the burden of present circumstances, the oil and gas sector poses some special challenges. For one thing, oil and gas companies have stringent requirements that suppliers have to follow. “They have various sets of rules as to how you build their equipment, in terms of testing, in terms of metallurgy, sometimes in terms of redundancy in safety and quality, things they want to see built in,” Greene says.

But customers have also come to value Bilton’s engineering skills, and they will often accept improvements or changes that it suggests. “They’ll incorporate our intellectual input,” Greene says. “It might have to do with the size of the equipment, or with the process. They may initially want to use a process they’ve used in the past, but if we find a different process will be more efficient, in some cases they’ll go with that.” 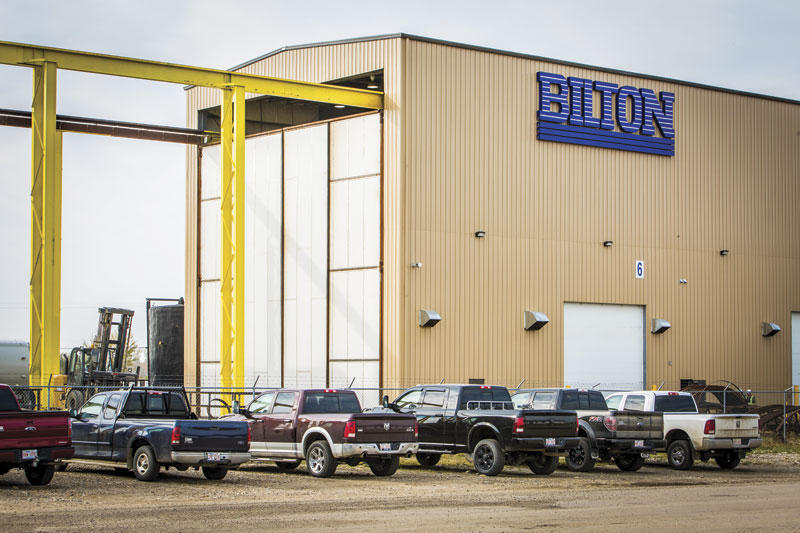 The catastrophic fall in oil prices has sent shock waves throughout the market, but Greene notes that opportunities remain in the midstream segment–the part of the market that includes processing and storage of crude oil and natural gas– while the gas market is still active.

That puts Bilton in a good spot, as it has proven able to adapt quickly. “Five or six years ago, 80 per cent of the equipment would have been going to the oil sands, because that was the busiest sector in the industry,” Greene says. “Now we can switch to gas processing equipment with the same facility and most of the same trades. We have the engineering expertise in-house, and if not, we are able to hire good talent right now.”

Some competitors, and even a few customers, have laid off skilled people that Bilton has been able to hire. Being one of the relatively few companies hiring in this market gives Bilton the pick of skilled, experienced human resources.

Greene estimates that this is the fourth or fifth downturn that Bilton has been through. The company came into this one in a solid cash position, thanks to some good years and a conservative approach to spending. It has put that capital to good use within the last several months.

“We’ve made a number of investments to add value in terms of forming and bending pipe, beam and plate steel,” Greene says. The company has acquired a Durma PBH 125 CNC profile bender and a Durma AD-R 43320 CNC precision press brake, with a powered R-axis and Delem 66-T touchscreen console.

“With the brake, the operator loads up a piece of steel and then we can either bring in a drawing from our design team or nest the material on the brake and put in a number of different brakes, different depths of brake at different angles,” Greene says. “The machine will manipulate the piece and give us the finished product as it’s been drawn.”

Bilton no longer has to buy as much preformed steel. “A number of the components we build have different shapes and forms, and we used to buy the pieces formed,” Greene says. “We’d pay a premium of sometimes 20 or 30 cents on the price of steel, which is significant.” Bilton plans to pass the added margin on to its customers, rather than taking profit.

For a custom builder complete process automation is out of the question, but Bilton automates wherever it can. It uses a CNC plasma table to cut components using CAD drawings. And it uses a unique semi-automated welding process. 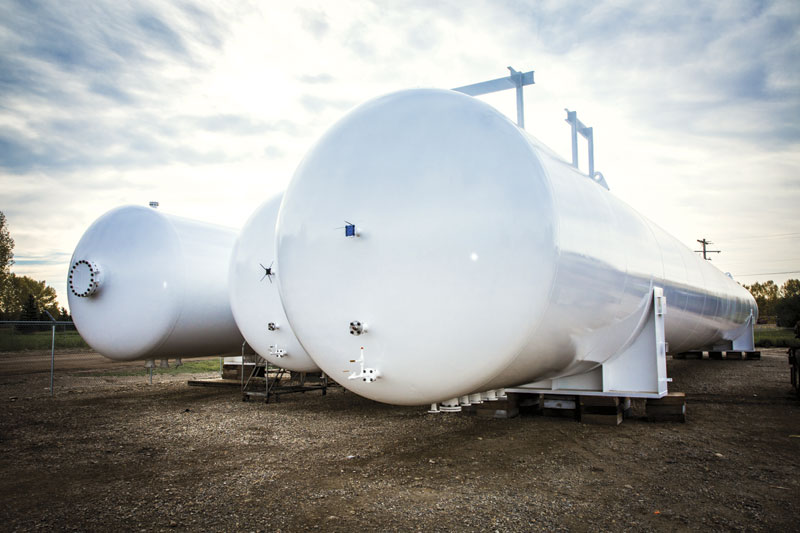 “We can’t bring in robot arms because the nozzle and seam locations are always going to be in a different position. We’d have to reprogram the arms constantly, now for a vessel two feet in diameter, then for ones that are 14, 16, 18 feet. Or 10 feet long then 280 feet long. But where we can we definitely automate. For 90 to 95 per cent of the seams we weld on the vessels or tanks, we use a semi automatic submerged arc process.”

Bilton has steadily taken on more of the services associated with the products it builds, such as painting, coating, insulating and electrical instrumentation. “All types of things get added to our equipment after we manufacture it,” Greene says. “We do all that in-house as well. We don’t just have welders; we have pipefitters, machinists, painters and coaters, insulators, electricians–a broad range of people we can train on these various pieces of equipment.”

No matter how bad the market gets there’s always a certain level of activity, Greene says. “These companies are for the most part publicly traded. They have to show shareholders some activity, so they have to spend a certain level of money. Certainly right now it’s far from where it was two or three years ago, but there’s still activity. We go where it is and we build the products they need.” SMT