Despite some uncertainty, prospects for Canadian manufacturing are looking good

In September, the Organization for Economic Co-operation and Development (OECD) announced a revision of its June projections for economic growth in Canada. The June report had predicted a growth rate of 2.8 per cent for 2017; the September forecast bumped that to 3.2 per cent, the best in the G7 countries. The OECD maintained its prediction of 2.3 per cent growth for 2018.

The OECD takes the 30,000-foot view, but Robert Cattle, executive director of the Canadian Tooling & Machining Association (CTMA), is in a position to see the good news on the ground, and what he sees suggests the optimistic point of view is well founded when it comes to the nation’s manufacturing sector.

“The outlook is very upbeat,” Cattle says. “I go into a lot of shops through the training programs we’ve been running, and everybody’s very busy, everybody’s trying to get the work out the door.” 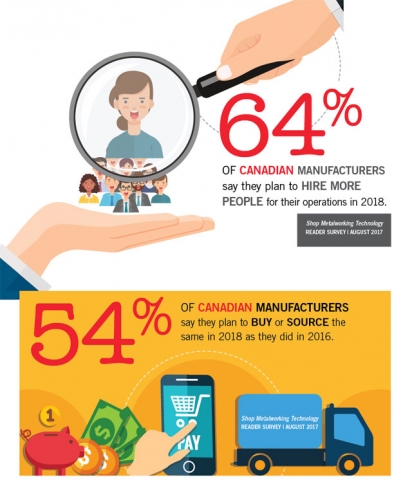 Cattle says he’s found, over the last several CTMA board meetings, that some companies in a broad range of sectors–mould making, die making, fabrication, steel suppliers and others–are even fully booked through to the end of next year. “I’ve seen a lot of companies expanding considerably and buying machines,” Cattle says.

“But I also hear constantly from machine shop owners who say ‘I’d buy more machines and take on more work if only I could find enough skilled people to run them.’ This is something I hear all the time, and the CTMA has been involved in training programs to fill the skilled trades gap.”

The shortage of skilled labour continues to be a perennial problem across many sectors of the economy, but in the end it doesn’t seem to be seriously damping near- and mid-term prospects.

The Canadian dollar continues relatively low against its US counterpart, which has positive and negative consequences depending on one’s point of view.

“It’s something of a time-honoured thing, but it bears repeating; when the Canadian dollar is low versus the US dollar, Canadian shops get filled-up order books before the American shops do,” Cattle says. “Who wouldn’t take advantage of 20 to 25 per cent on the dollar?”

The dollar has gained some strength recently, and while the gains have been mild, it does raise the question of possible impacts if the gains continue or even gather steam.

“A higher Canadian dollar certainly could affect exports in a negative way,” says Todd Evans, senior economist at Export Development Canada. “If it moves higher, that could certainly dampen some enthusiasm, but if it stays in the $0.80 range, that’ll be an okay spot for Canadian exporters. 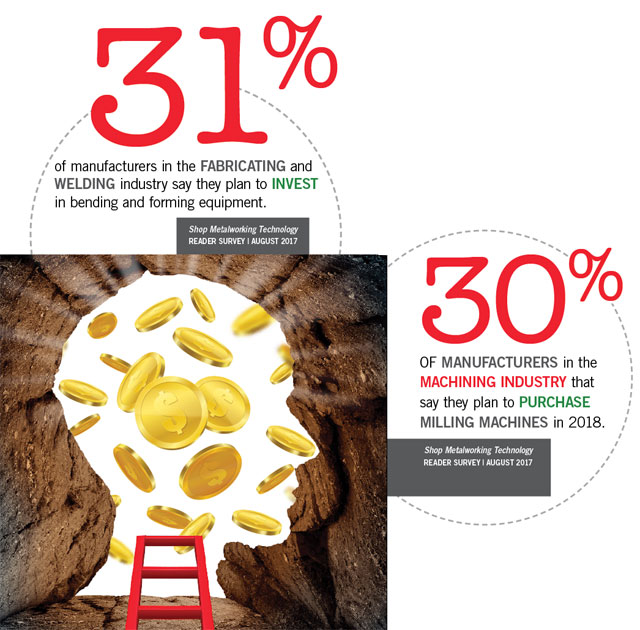 “A lot of companies in Canada import goods and services from the United States, a lot of their parts and components, so to get that much extra purchasing power when the dollar’s stronger kind of offsets the downside.”

Spending it forward
One good sign for Canadian manufacturing is the continuing growth in US manufacturing investment, particularly when it comes to investment in machinery and equipment, Evans says.

“In the United States, capacity utilization from manufacturing in general is starting to get back to the levels we saw prior to the last downturn. In some manufacturing subsectors in the US, for example the machinery sector, you’re starting to see capacity utilization–in particular for the fabricated metals component–getting pretty tight, certainly well above the long-term average.”

This suggests that demand will increase and that when these sectors look for ways to meet that demand, Canadian suppliers will be well positioned to fill the gap.

The surprising–to some–victory of Donald Trump in last November’s presidential elections has generated a political and economic climate of increasing uncertainty. Evans says that one response by Canadian manufacturing firms has been to seek new markets, a trend that’s been underway for several years but is now accelerating.

“We’ve started to see Canadian companies look at other markets as a way of diversifying their export sales. Even though the US is still their key market, there’s been a lot more interest certainly from our customers looking for ways to diversify away from the United States, given the uncertainty that we see there.”

When it comes to uncertainty, the NAFTA negotiations probably top the list, given Trump’s apparent determination to force significant changes to the agreement, which he says works against US interests. Not everyone is sure that serious disruption is in the cards, however.

“NAFTA has been a scary word since Donald Trump has been using it,” says Tejal Mehta, vice president of operations at machine tool distributor EMEC Machine Tools and current president of the Canadian Machine Tool Distributors Association (CMTDA).

“I think the talks will always be there, but I can’t see any major changes in the manufacturing sector in the short term. I don’t think it can be done. There’s so much at stake, and levies on tariffs, import taxes, duties, all these things can affect cross-border trade across the continent. With North Korea, China, and other issues, I just don’t think NAFTA can be in the forefront right now.”

Evans agrees that while there may be uncertainty around the NAFTA talks, how much change will actually result is a different matter. “Our view is that at the end of the day there will be a new agreement. How much will it change? Probably not a whole lot.”

Evans believes Canada-US trade is too big a ship to be turned quickly, especially given the high degree of integration between the two economies.

“It’s in no one’s interest, here or certainly in the United States, to start breaking up that relationship. Companies have invested billions of dollars on both sides of the border to build out those cross-border supply chains. These arrangements are very sticky, very hard to break—and very costly to break.” SMT