A limited build area has been one of the major challenges in developing additive manufacturing’s practical potential. Powder bed fusion technology is currently limited to about one cubic foot, with two
cubic feet the likely limit for some time to come.

But that could change with the blending of multiple additive manufacturing technologies–and the addition of robotics. At least that’s the hope of Lincoln Electric, whose wholly owned subsidiary Wolf Robotics specializes in robotic welding and cutting systems. Lincoln showcased its latest work in medium and large scale robotic metal AM technology at the 2016 International Manufacturing Technology Show (IMTS) in Chicago last September, and again in November at FABTECH 2016 in Las Vegas.

“Current efforts are focused on printing large titanium and steel parts,” Flamm says, “though the system will also be capable of processing nickel alloys, aluminum, and others.” 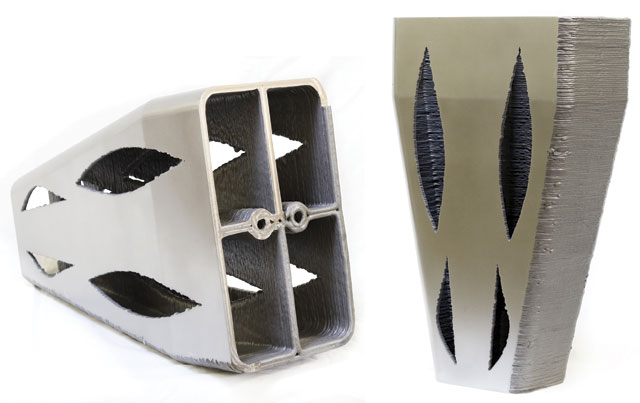 Flamm says the new systems are being developed to deliver on three fronts. First, they are pushing the current powder bed build envelope. The new systems, says Flamm, can print small, medium and large scale parts “and are easily scalable with the addition of tracks or multi-axis gantry systems to extend the robot build envelope.” Sizes exceeding one metre in any given direction are possible. Flamm says a seven-foot stick will be printed for ConExpo next March in Las Vegas as part of the AEM Tech Experience booth.

Third, the print path programming is fully automated, with a CAD-to-path workflow optimized for six-axis industrial robots. The lack of such a
product on the market has been a major obstacle up to this point, Flamm says.