Sometimes when you buy a new machine tool, the payback is very quick. Other times it takes a little longer to turn the corner. This was the case for Thomas Johansson, president and owner of H&O Cylindrical Precision in Waterloo, ON. After purchasing the now 73-year old company in 1996, he immediately began investing in new equipment.

This effort reached a peak somewhere around 2011, when he and his team took delivery of their fourth Okuma LT200-MY CNC lathe from long time partner EMEC Machine Tools, machines that were far more capable than any of the others purchased at that point in this 62-person shop’s history.

That’s right about the time that business slowed down. Significantly. “I was feeling pretty bullish back then, and figured the additional capabilities that come with a Y axis, mill-turn centre would create some new business opportunities for us,” he says. “They did, but it just took longer than any of us expected. Where many shops see a two year return on their investment, ours took three times that, something I attribute to the slow economic recovery.”

From Sweden to Canada and the US
Johansson never planned on owning a machine shop, let alone three of them. Born in Sweden, he went to the US for college, where he studied finance and economics. Instead of going to business school afterwards, he decided to gain some experience and make some money by taking a job in the banking industry. Five years later, he applied for a US work permit but quickly found that immigration policy in the States is a moving target. He was declined.

“I’d saved enough money, had the initial approval and right paperwork, and had hired an attorney to deal with everything, but when I went to Canada to re-enter the US under the right status, the process turned out to be less smooth than anticipated,” he says. “I ended up staying a couple weeks with a friend from college, and he introduced me to H&O, which after some negotiations, I ended up purchasing. And even though I did not actually live in Canada, I was very warmly welcomed when I declared my desire to invest in and work in a manufacturing business there.”

As its name implies, H&O Cylindrical Precision specializes in round parts. The company is ISO-certified, offers precision grinding, honing, hot forging, and machining services, and has a broad customer base that includes military and aerospace suppliers, with requirements for everything from core pins and other plastic injection mould components to parts for the now defunct US space shuttle program, heavy motors and machinery, oil and gas, and more.

“We’re just very versatile,” says Mike McDougall, H&O plant manager for more than 30 years. “Shafts, stems, bushings, pistons and tubes…give us pretty much anything round, and we’ll make it.” He laughs, “We’ve even made parts for toilets.” 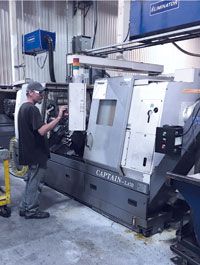 A not so steep learning curve
Despite the fact that no one at H&O had any experience with Y axis turn mill machines, McDougall says his people found the Okuma LT200-MY lathes easy to setup and operate. The programming, which each CNC machinist is responsible for, is the same as the other dozen or so Okumas on the shop floor. Once the intricacies of twin spindle and live tool machining were figured out, “the guys just picked them up without any trouble.”

Johansson shares in that ability to pick things up. Aside from H&O, he also owns Prestige Products, a Swiss turning shop in Minneapolis, and Noords, a machine shop in Sweden. “After I left banking, I decided to invest in manufacturing companies,” he says. “In all, I looked at three businesses, and ended up buying each of them.”

As with H&O, Johansson has tried to keep each of his shops as technologically current as he can, although the less than robust economy over the past few years has slowed that effort somewhat. Still, he has no regrets with any of his Okuma purchases, nor with the Tsugami CNC Swiss lathes he’s had installed at Prestige Products over the years, and he plans to continue investing in new equipment when the time is right.

Here for the duration
“When you buy something, you should expect to keep it a long time,” he says. “That’s just as true for our three companies as it is for our machine tools. The Okumas especially have proven to be very fast and accurate, but sturdy enough to last however long we need them. They’ve been really good machines. And Brendan Cunningham, our sales rep from EMEC, has called on us for many years. He stops by periodically to inform us about what’s new and available for whatever application we may be working on, even if he knows we’re not ready to buy. It’s a relationship we really appreciate.”

For McDougall, machine longevity might be a wonderful thing, although his biggest concern is getting parts out the door as quickly and cost effectively as possible. To that end, the LT200s have been just the ticket. Not only have they proven easier to operate than anyone expected, but the setup times are shorter as well, a pleasant surprise given the machine’s complexity.

“They’ve been really beneficial for the work we do,” he says. “Even though our cycle times have gone up due to the additional machining that’s now done in the lathe, the fact that we can drop parts complete more than outweighs the cost of the multiple setups we had in the past. We’ve found that we’re able to do shorter runs and get them done in less time, and our work-in-process has gone down substantially. Parts come off the machines, basically ready to ship.” SMT