Breaking with tradition in turning operations can bring big benefits

Any machinist worth his or her salt knows one of the cardinal rules of turning: keep the cutting forces directed towards the spindle. Not only does this help prevent the unpleasantness that comes with tearing a workpiece out of the chuck, it also pushes the turning tool against the toolholder and load-bearing surfaces within the turret mechanism. Even without a catastrophic event, failure to do so places undue stress on the machine tool itself, and may even shorten its life.

Not necessarily. Compared to machine tools from 20 years ago, today’s CNCs are tough. Bearings are stronger, slideways more robust, positioning systems more accurate. Isn’t it only logical then to reconsider some of the tried and true paradigms of years past, tossing out the old ways of doing things like a bad habit?

Prime time
Sandvik Coromant thinks so. The tooling provider recently introduced a new concept, PrimeTurning, which it says reinvents turning. Product and industry specialist Kevin Burton says CoroTurn Prime‘s success is largely due to the chip thinning effect. “It’s very similar to high feed milling, and produces similar production improvements,” he says. “For example, I participated in an event with Mazak where we machined 300M (modified 4340 alloy) and 1050 medium carbon steel. The metal removal rates were way beyond what could be achieved with a CNMG (an 80° diamond insert).” 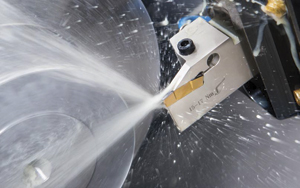 How does it work? By turning with the back side of the insert, PrimeTurn is effectively positioned at a positive lead angle, increasing edge engagement. This keeps heat away from the nose radius, reduces depth of cut notching and built-up-edge, and greatly increases tool life and permissible feed rates.

But wait a minute. Machinists have been tipping tools positive for centuries–what’s the big deal? “There are plenty of positive-lead turning tools on the market today, but they can’t produce a square shoulder,” says Burton. “Because PrimeTurning maintains a negative lead angle on the side facing the chuck, there’s no need to come back with a second tool to clean out the corner, as you would when using a conventional approach.”

Two types of PrimeTurning exist. The A-type looks much like any other triangular insert. It is designed for light roughing, finishing, and profiling operations. The B-type has a flattened football shape and is primarily intended for roughing, although Burton is quick to point out that—part geometry permitting—it does a fine job of finishing as well.

Standing before the machine, you’ll see that PrimeTurning tools are oriented much like any other turning tool. The difference is that when turning a shaft, for example, PrimeTurning arcs into the workpiece on the left and works its way towards the face, the exact opposite of traditional turning. According to Burton, the result is 50 per cent better tool life and a 50 to 80 per cent increase in productivity.

Sounds great, but what about the rule-breaking discussed earlier?

“We consulted with a number of major machine tool manufacturers early on, who indicated there would be no problems,” Burton says. “They were right. All through the testing and rollout phase, there have been no issues with tool or part pullout with PrimeTurning, nor problems with the machine’s electromechanical systems.” 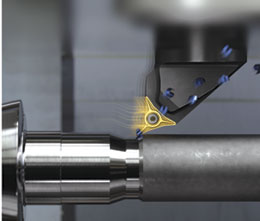 Pretty groovy
It’s important to note that even though PrimeTurning cuts in both directions, the chip thinning benefit disappears when turning conventionally, where the insert acts much like any other turning tool. It’s also important to point out that Sandvik Coromant didn’t invent multi-directional turning (although it’s certainly the first company to implement it in this manner).

A number of tooling providers have introduced inserts capable of turning in the Z-positive direction over the past few decades, with Iscar Tools Inc. the first horse out of the gate. “We invented Turn-Groove back in the early ‘80s,” says Steve Geisel, senior product manager for Iscar Tools Canada. “Since then, we’ve continued to expand the family with the Sumo-Grip, Heli-Grip, and similar tools. Today there roughly 14 different product lines that can do this type of application, with new chipformers and coatings added all the time.”

Geisel is quick to point out that the Sandvik solution is a distinctly different concept than groove turning. Yes, both are capable of multi-directional turning, but Iscar’s solution is designed for reaching behind shoulders, and for turning grooves that are (as a rule) at least four times wider than they are deep. They are not intended as a replacement for a CNMG or similar turning tool, although they can certainly be used that way where tool positions are limited, for example, or where material removal is limited. As for turning away from the chuck, Geisel says go for it.

“There’s no problem with that, as long as the tool is designed to cut in both directions,” he says. “However—and I don’t care whose tool you’re using—you should still be careful any time you start machining away from the spindle. Do you need tailstock support? Are you holding the part in soft jaws or hard jaws? Are the feeds and speeds appropriate? You have to be aware of the cutting forces, and quite possibly adjust the cutting parameters accordingly.”

Zig-zagging to success
You’ll likely need to adjust the program as well. Iscar and Sandvik have both worked with MasterCAM and other providers of programming software to develop what in Iscar’s case are called “tool packs” that help determine the appropriate feeds, speeds, depths of cut, and toolpath for a given tool and material.

“That’s probably the biggest thing that people need to understand with any kind of multi-functional tool: if the tool is not programmed properly, it’s not going to work. With a turn-groove, that might mean zig-zagging back and forth in the Z axis, or it might mean plunging in the X axis if that makes the most sense. When these tools first came out, there weren’t any CAM packages capable of turn-grooving, so some people were left with a bad taste in their mouth. That’s all changed. Today you can just map out the groove geometry within the software and, largely because of the information we’ve provided to the various CAM providers, it will generate an effective toolpath.”

Whether PrimeTurning or Turn-Grooving, everyone agrees it beats the old-fashioned alternative, which in the case of “behind the shoulder” turning usually meant using left and right-hand turning tools to rough out the area in question followed by a groover to clean it up—multi-directional turning eliminates two or more tools, simplifies the setup process, and makes programming easier besides. 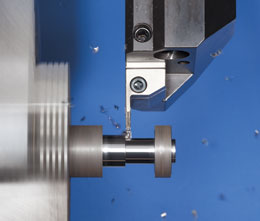 Strategic moves
Dave Essex, turning product manager at Tungaloy, adds that just because you can cut in multiple directions doesn’t always mean you should. “Sometimes it’s faster just to plunge the whole thing out, leave a little material and take one final turning path, all with the same tool. You don’t necessarily need to groove-turn back and forth, although that’s definitely doable with our TungCut or EasyMultiCut, for example. It all comes down to what’s the most efficient way to get the job done based on the part geometry, the material, the machine, and the job quantity.”

Ken King agrees. The chief operating officer of Kaiser Tool Co. Inc., King says using multiple tools to cut a groove or recess means you have to wait for the first tool to retract, index to the next station, and then pick up where you left off.

There are different offsets to deal with, and if one tool goes dull or breaks, it can easily affect the subsequent tools. Groove-turning, on the other hand, let’s shops get more done with a single tool, and be more profitable as a result. 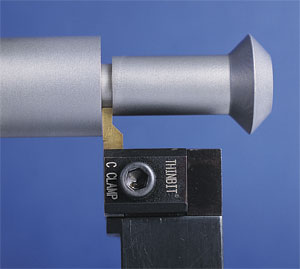 “Our Groove ‘N Turn will go towards or away from the chuck with the same insert,” he says. “You never have to leave contact with the work at all—if you want to see a good example of this, check out the chess set we made on our YouTube channel. It’s pretty cool.”

Because of the various forces acting on the tool, multi-directional turning requires a very stable insert. King notes that any kind of movement must be avoided and the insert prevented from pushing back into the pocket, both of which are critical to anyone who wants to move axially and radially with a cutting tool. Once that has been accomplished, however, groove turn is often a huge timesaver.

“The entire process is simply more efficient with a multidirectional turning tool,” he says. SMT

INSIDE THE NUMBERS: The most popular machinery investments for Canadian job shops