With a little help from robotics, cellular manufacturing is alive and well in Canada

Not long after Canada adopted the metric system, I was working in a shop whose owner had a firm belief in cellular manufacturing. If a part needed a secondary operation (which virtually all parts do) there we’d be, shoving a machining center or a lathe across the floor to form an ad hoc cell. Repeat jobs or long runners would be tumbled through multiple operations, the operator kept constantly busy moving parts from machine to machine to machine. Work in process was kept to a minimum, lead times were short, and labour costs quite competitive.

Manufacturing technology has changed greatly since then. The past 30 years have brought us ever more capable machine tools, to the point that parts which once traveled around the shop for visits to multiple machines (or one trip around a manufacturing cell), can now be produced on a single advanced machine in one operation. If my former boss were still around, I imagine his shop would be filled with such multi-tasking machines, and probably have a robot standing before each one.

Embracing the new paradigm
Robots have become increasingly accepted (and necessary, given the current labour shortage), with smaller price tags and greater capabilities. Multi-tasking and turn-mill centre purchases are on the rise. Yet it’s fair to say that many shops continue to shy away from these electromechanical production boosters in favour of traditional two axis lathes and three axis machining centres, and fewer still corral those machines into cellular configurations. If you’re one of these, maybe it’s time to explore some more advanced manufacturing options.

Vince D’Alessio thinks so. The executive vice president of Elliott Matsuura Canada Inc., he’s worked with several shops recently that have not only moved into multi-tasking, but embraced robots as an important part of their success strategy. Moreover, some of these customers are expanding the machine tending role of robotics, along with the size and complexity of their cells, to include activities that were once considered beyond the scope of cellular manufacturing. 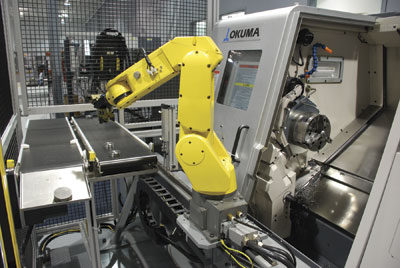 “Let’s say the part has to be washed, laser marked, and inspected,” says D’Alessio. “We’re working on projects throughout Ontario where customers want to perform these and other non-machining operations in an unattended manner. That’s what’s changed recently. You put a part into a multi-tasking machine and most of the time you’re going to take it out complete, but how do you know you’re making good parts? And what about all the other operations that add labour cost? At the end of the day, all these factors and more must be considered before making the move to automation, regardless of the type or brand of machine tool.”

But how does one know the best cellular configuration? Some might argue for three to four traditional CNC machines, where parts are moved through the various machining operations until complete. Robot or no, this provides a shorter cycle time but lower part quality than a multi-tasking machine able to finish the part in one handling. “Multi-taskers, plain and simple, are slow,” D’Alessio says. “In a high volume production situation, they can’t compete. But for complex, high value parts in low quantities, you can’t beat the part quality and flexibility that comes with a multi-tasking machine. And when you put a robot and some sort of automated inspection system into the equation, you eliminate the need for an operator to check parts, make offsets, and so on. It’s the next logical step in manufacturing.”

Cellular is alive and well
Ray Buxton, general manager Mazak Corp. Canada, agrees. “There are a whole bunch of things that go into the selecting the correct automation for a customer’s application, including part configuration and mix, production quantities, operator skill level and available budget…it’s a complex formula,” he says. “But where automation used to be an almost private venue for automotive and some very high volume manufacturers, more and more we’re seeing a need in low volume shops for more flexibility and better cost control. Given the right application, automation and cellular manufacturing is often the best way to achieve both of those goals.”

As proof, look at Mazak’s facilities in Kentucky and elsewhere. All are highly automated, with a product mix and production quantities comparable to that faced by many job shops. “Our volumes are not high, but the variation we deal with is,” says Buxton. “Because of that we’ve developed a broad range of expertise in cellular manufacturing and short run automation that can be applied equally to our customers’ needs. This includes robots, but also flexible manufacturing systems and palletization. And because of the difficulty our customers have in finding and oftentimes paying skilled labour, these solutions are becoming more prevalent.”

Okuma America Corp. is another machine tool builder that places an emphasis on highly automated manufacturing at its own factories, technology that trickles down to Okuma machine users. Jeff Estes, director of the Partners in THINC technology centres, says cellular manufacturing is alive and well, but often incorporates some type of advanced machine tool or even multiples of such machines in a single cell, despite their slower throughput. 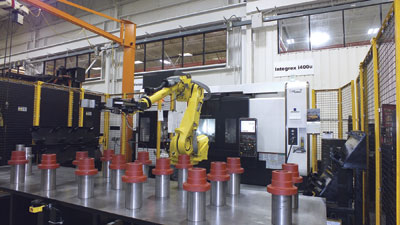 Take a quick ride
One case in point is a major North American automobile manufacturer, which according to Estes uses more and more mill-turns and multi-function CNC equipment all the time. “This isn’t to reduce machining time or even part cost, but rather to improve part quality. These machines don’t rely on an operator to place a part in a fixture or chuck: the robot does it, the same way every time. Quality is improving, so thus scrap and rework is going down. The result is that total throughput is improved—even though you might have a little more machining time up front, you achieve better productivity overall.”

In an automated environment such as this, slightly longer cycle times can be an advantage. Because the robot has more time to “hang around” while waiting for a multi-tasking machine to finish a complex part, it’s able to service far more pieces of equipment than it otherwise would. “We used to be quite concerned about the distance a robot would have to travel,” Estes explains. “In a traditional cell, each machine might spend just a few minutes or less on its operation. This doesn’t give much time for the robot to go off and do other things.”

But with the normally longer cycle time that comes with a multi-tasking machine, which often turns, mills, grinds, and even hobs parts in one operation, there’s plenty of time for a robot to travel wherever it’s needed. According to Estes, this means one robot might feed five to eight machines, taking care of the deburring, assembly, and packaging along the way. “This is an exciting time to be in manufacturing,” he says. “These multi-function machines and the automation that goes with them are really changing the footprint.”

Pretty much everything a human can do
Someone that knows all about it is Geoff Dawson, national account manager at Fanuc America Inc. Dawson says he’s seeing great interest in traditional industrial robots that utilize safety fencing and safety sensing devices along with software to prevent contact with humans (what most in the industry refer to as speed and separation monitored collaborative robot), as well as those that are force and power limited (aka collaborative robots), either of which can be used to move parts from station to station in machining cells. 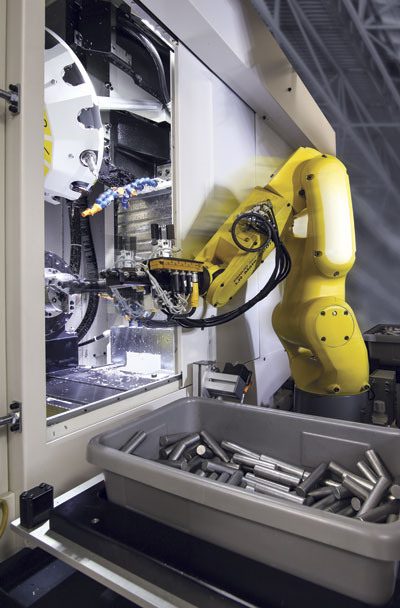 How do you know which one to buy? The short answer is this: standard industrial robots can still be used around humans with the appropriate sensing hardware, but are best where operator presence is occasional, to reload raw material every few hours, for example, or to perform periodic checks of critical part features. Cobots, on the other hand, with their slower speed, are most appropriate working alongside a human, assisting them with mundane tasks while the operator performs more value-added work.

Whichever way you go, robots have come a long way since their “automotive only” days. No longer is there a need for floor-space-hungry conveying systems and fixed guarding. In most cases, robots are smart enough to find parts wherever and in whatever orientation you set them. Dawson says each integrator has its own preferred solution, but many rely on 2D and 3D vision systems, which allow the robot to find parts in a pre-filled plastic tote, pull them from a drawer, or even reach into a wooden crate full of randomly oriented slugs or castings. The robot picks the parts up, reorients them if necessary, and places them into a fixture, chuck, or whatever workholding device is being used. When the part’s done, the robot carries it to the next operation.

Dawson says the use of robots in growing because of the flexibility they bring to a manufacturing shop floor.  “There are still a lot more machine tools being sold than there are being automated, but we’re definitely seeing growth, especially with those shops that use a CNC machine during the day for low volume or prototype work, then have a robot keep it busy at night.. And of course, there are some very nice cells that have been developed by multiple companies that are quite capable of the low volume, high mix work typical of many job shops. In these cases, the robot is parametrically programmed to handle different size parts in a family or group of parts, or simply retaught how to do its job, either of which makes changeover quite fast. The technology continues to improve almost every day.” SMT