Precision Enterprise,  Mount Uniacke, NS
Founded in 1986, Precision Enterprises has several manual lathes and three milling machines, among other equipment. The company has a long history of building parts for oceanographic survey, sampling and research equipment, but owner Michael Morrison says he’s looking for new markets following the loss of a major customer that moved corporate operations to Ontario and shut down its plant in Dartmouth, NS.

GeoTech Precison Inc., Montreal, QC
When Geotech Precision was founded in 1990, its primary equipment consisted of high volume multi spindle automatic screw machines. In the 1990s the company transitioned to CNC machining centres. Today it offers a full range of CNC milling and lathe services, backed up by a secondary operations and assembly department. 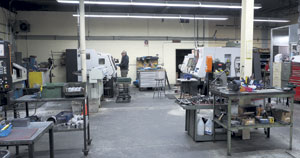 Geotech owns its own 1,115 sq m (12,000 sq ft), though it uses only 790 sq m (8,500 sq ft) itself. The company has eight employees. “In the 90s we had up to about 30 employees, but that’s when production was very different, with the old conventional geared-type machine. That has changed. But we’ve been steady over the last 10 years or so,” says Peter Montroukas, president.

Since the end of the 1990s the company has focused on developing its CNC milling and four-axis turning capabilities. “Our most recent equipment purchases was two Mazak milling machines. We also have two Mazak MSY four axis lathes with bar feeders.” Other equipment includes Hyundai, Fabel and Haas lathes.

Noble Precision, Toronto, ON
Founded in 1992, Noble Precision is a network of companies, not a single company. President Manos Pavlakis says Noble started without a specialty and initially worked as a service company for CNC machining. “Over the years we started creating by-product companies. We started machining for machine builders, for instance, and then we started adding more value to that by doing the assembly.”

Universe Machine Corp., Edmonton, AB
The recent recession in the oil sector “was likely the worst Universe Machine Corp. has faced in over 51 years of business, and most comparable to the early 80s recession,” says Ron Feigel, who handles technical sales and business development. The family-owned company went from 140 employees to around a third of that number, though they maintained wages and benefits for remaining staff. 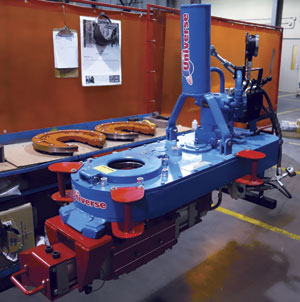 Founded in 1965, Universe has become adept at making the most of slow periods, using them to conduct R&D in particular. During the recent recession, the company introduced the new Universe bucking unit, which it designed using existing items it already makes for drilling and service rigs. The bucking unit enables customers to pre-assemble pipes and couplings more effectively and accurately. Other new offerings developed in-house are also on the way, Feigel says.

Primary equipment at the company’s +100,000-square-foot facility includes large CNC machines like the Mitsubishi horizontal boring mill and the Titan vertical lathe, which can handle workpieces up to 50 tons. 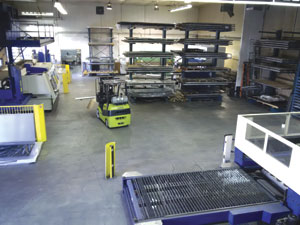 , Langley, BC
KSM is a family-owned business established in 1977; current owner and general manager Lisa Burgess is the daughter of the original founder. Primarily a sheet metal shop, KSM has two TRUMPF CO2 lasers–a 5000W L-3030 TruLaser, acquired last year, and an L-2510, as well as two press brakes: a TRUMPF 5230S and a 1.2 sq m (4 ft) Mecos.

How’s business? “It’s stayed steady over the past couple of years,” Burgess says. “We could always be busier of course–that’s always the ideal way to grow. We’re quite specialized in what we do because we’re a job shop; we don’t have to do huge runs so we have a lot of smaller companies as customers. That helps us out.” 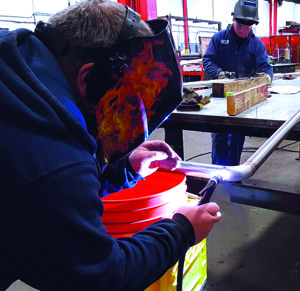 Delta, BC
Marcon was founded in 1981 and was purchased by the current president, Ari Burstein, 12 years ago. When Burstein started in sales for the company, four years earlier, Marcon had a handful of employees and generated under $1 million in sales. By the time he took the wheel, Burstein had tripled sales and increased payroll to 10 employees. Today Marcon boasts more than 100 employees and $20 million in sales.

Burstein says Marcon has the only 3D structural laser in western Canada (Mazak Optonics) and he believes the company also has the largest fibre optic laser table in Canada (a 6 kW Mazak Optonics). Marcon has several press brakes, including a custom-built 235-ton Accupress Accell CNC brake with a 1.8 m (6 ft) bed.

Jacob Industries, Whitehorse, YT
Founded in 1943, Jacobs Industries is a family-run welding and machine shop based in Whitehorse, YT, but serves a clientele across the western Northwest Territories as well as northern BC. The company’s work is varied and even includes automotive, truck and industrial repair, in addition to production of commercial gases for the general public and the mining, transportation, construction, government and automotive sectors. The company has 12-15 employees depending on the season (summer is busier), working in a roughly 1,858 sq m (20,000-sq ft facility). The shop houses six lathes, one of them among the largest in the Yukon, two mid-sized three axis milling machines, and a horizontal boring machine.

President and owner Robert Jacobs says there are no plans to go the CNC route, even though competitors have wangled government grants to automate their equipment. “It’s not a question of the cost for us,” he says. “But with CNC equipment it takes a long time to set up the job, and if you’re only doing one or two pieces at a time, it’s so much easier to just do it with the operator-controlled machine.” He laughs. “So we’re OC, not CNC.”