IWL Steel Fabricators LP of Saskatoon can trace its roots back to the 1950s, but the company in its present form came into being in 1990. The company was acquired by the operating leadership group in the mid-90s, who continued to grow and expand the business through challenging economic times up to 2012, at which time it was purchased by the Clearwater River Dene First Nation as part of a portfolio expansion, making it 100 per cent First-Nations-owned.

IWL provides steel fabrication and welding services for the industrial, commercial and institutional (ICI) market. The company also has 4.5 acres of exterior lay-down space, which helps it take on large scale projects. A sister company, RobWel Constructors LP, provides site installation for mining and industrial projects. RobWel is based in Meadow Lake in northwest Saskatchewan.

IWL does commercial work more or less as a “filler,” as it’s a step away from the company’s core competency as a value-added supplier. Commercial work is less complex and, more importantly, the customer is typically honing in on the lowest possible price above everything else. The market is also extremely competitive, so the low price pressure is even stronger. The ratio of mining/industrial work to other lines is generally 75:25, says president and CEO Patrick Kuprowski. When the economy picks up it’s more like 80:20.

“The core competency of the organization is the ability to cost effectively produce and supply steel fabrications for industrial needs,” Kuprowski says. “It’s mainly within Saskatchewan. A bit of international business has been done in the past, but for the most part we have a Western Canada focus.”

IWL relies on providing the value added services that industrial customers are looking for. A big part of that capability arises from the participation of IWL’s engineering CAD group to support every bid. 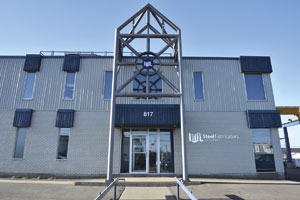 “We don’t let our welders and fabricators fight through things. It’s all engineered upfront, which costs us a little bit of money, but at the end of the day it ensures a higher quality product and that’s what we want on the industrial side of our business.”

Payroll is currently around 35, but fluctuates slightly with seasonal shifts and upturns or downturns in customer spending. IWL had to scale back a bit in February with a downturn in customer spending, but has bounced back quickly. Kuprowski expects 2017 revenues to be a big improvement over 2016, following a few big wins earlier in the year.

The cutting edge
Primary equipment includes a five axis CNC robotic PentARC Versa beam line plasma cutting system, which has been on the shop floor for a long time now. It was a strategic initiative by the company, Kuprowski says. Process functions include measure and cut to length, coping, hole piercing and piece marking. It’s used to process raw material to design after IWL’s CAD/CAM specialists have developed 3D solid models from the design provided, using Tekla Structures modelling software. The models are then converted to machine code and run on the beam line.

“Our technologists on the CAD/CAM side are very strategic in terms of being able to convert what the customer is looking for, what they approve, and then putting it directly onto the shop floor,” Kuprowski says. “Having a skilled technician/operator on the floor, we can process materials efficiently and get into fabrication significantly quicker. That helps all of our bids.”

It also helps with the work IWL does with partners that may have less automated capabilities. “Where others may do the same kind of work manually, it allows us to help them out on their bids or dealing with a backlog. We can convert that into value added services, for a win-win all around.” 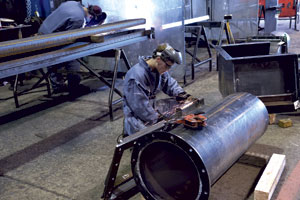 Another key piece of kit is the midsized (8 X 24 ft/2.4 x 7.3 sq m cutting bed) Koike Aronson Plate-Pro 2500 plasma/oxyfuel plate cutting machine. IWL’s machine also has a Koike Kar CNC controller and a Hypertherm Plasma HPR260 system. IWL can download files to the machine direct from the drafting department’s nesting software to run the processing. “Nesting and material usage is very high, which again is part of the value-added service that we pass back to our customers via our CAD/CAM team,” Kuprowski says.

IWL’s quality assurance system, which is audited by the Canadian Institute of Steel Construction, uses radio frequency bar coding to control inventory and also to eliminate costly logistics cycles. Blast and paint processing is handled by business partners; at the start of processing, each component on a job is given a steel bar-coded tag. This tag uniquely identifies each component before it’s shipped out for blast and paint processing. The blast and paint facility scans each piece at receiving and once more when they’re done, and the information goes back to IWL. The piece can then be shipped direct to the customer instead of going back to IWL before final shipment.

“This way we know where everything is all the time,” Kuprowski says. “This reduces handling and processing costs, it reduces risk, it reduces damage, and it increases our throughput by eliminating double handling.”

Aside from some big ticket, high profile projects such as the $4.1 billion K+S Group potash mine in Bethune, SK, opened in May of this year, the province’s economy has actually been slow for the past couple of years, Kuprowski says. Although he sees some emerging positive signs, the tough economic mood was still strong as recently as a mining trade show in May of this year. At the event, each of the major mining businesses in Saskatchewan announced that their spending plans going forward remain drastically curtailed.

“Over the past 10 years collectively they spent billions,” Kuprowski says. “What they told us was that they’re now only planning to spend hundreds of millions. When you have a supply base that’s been supporting well into the billions of dollars, and they’re now going to fight over that much less, it becomes a very competitive marketplace.” 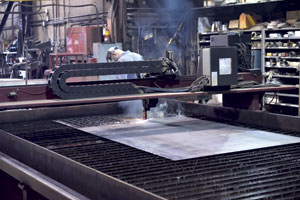 In response, Kuprowski and his management team are poised to seek out new, non-traditional markets for the company where its value-added proposition will give it good chances of success. When Kuprowski spoke with SMT, the strategic plan was still being formulated, but he did say the company was looking at what new investment would be required to address new lines of work while maintaining its market advantage.

“We’re continuing to service our traditional customers, but we’re also looking to some other customers who we may not have had strong relationships in the past, understanding what their needs are, and putting IWL’s value-added capabilities in front of them.” SMT