The owners of OSI Précision, Saint-Georges, QC, pride themselves on their problem solving capabilities. But when the job for the railcar wheels came along, they were left scratching their heads over what to do. “The diameter of wheel is close to 0.76 m (30 in.) across, and the running time was around one hour per side,” says OSI director of operations Denis Lachance. “The challenge we were having was that the inserts failed after about one-half hour. We’d have to stop the machine, change the tool, and then try to pick up the spot where the previous insert left off. The downtime was killing us and the chances of scrapping an expensive workpiece were quite high. It was a big problem for us.” 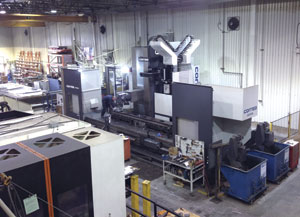 Machinists by trade
OSI Précision was founded in 1987. It has since grown to become an area leader in precision machining of small to medium size parts (along with some fairly large ones, apparently). Aside from its extensive two to five axis machining capabilities, the company also offers sheet metal services such as laser cutting and bending, as well as painting and mechanical assembly, and is certified by the Canadian Welding Bureau. OSI also has another division–OSI Machinerie–that designs and builds equipment for the hardwood floor industry, including a patented, self-centering planer for board processing. Between the two, this ISO-9001 company employs 50 people in its 3,700 sq m (40,000 sq. ft.) facility.

“We’ve been on a consistent growth path since day one,” says general manager and co-owner Sylvain Bernard. “Between founder and president André Lapointe, major shareholder and business development manager Jacques Michaud, co-owner and operations manager Denis Lachance, and myself, we have kept the company growing, with a commitment to continual reinvestment and a strong belief in empowering our employees. As a result, the company enjoys an excellent labor crew; many of them are in their forties, and have been with us since leaving school.”

The amount of reinvestment is obvious. OSI Précision is currently adding on another 550 sq m (6,000 sq. ft.) to a shop floor filled with a variety of high tech equipment, including DMG Mori CTX gamma 2000 and CTX BETA 1250 TC turn mills, several Nexus FH-series Mazak horizontal machining centres, and a number of Mazak multi-tasking lathes. In fact, it was on one of these machine tools—an Integrex 400 Y—that the problem with the wheels began.

“We have great experience with a wide array of parts, from large hydraulic manifolds for the hydraulics industry to foundry work, mining and forestry components, parts for the paper mills, and so on,” says Lachance. “But no matter what we tried, we couldn’t get the wheels to run at an acceptable level. We knew we had to try something different.” 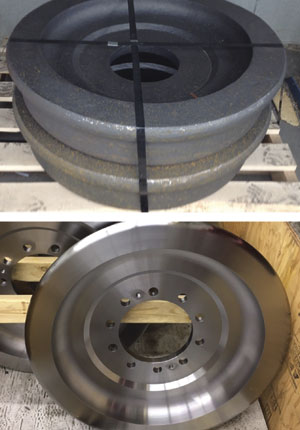 Changing gears
Like most job shops, OSI Précision relies on various vendors for its tooling needs. One of these is Sandvik Coromant, with which they’d had good luck and service in the past. When the competitive brand continued to fail on the railcar wheel, Lachance decided to see what Sandvik had to offer and called the area sales representative, Steve Boutin.

“I’ve worked with OSI for the past twelve years,” he says. “They are a very good customer, and do some challenging work. When Denis told me about the wheel parts–a 4340 steel forging that was heat-treated to 38 HRC, and required substantial amounts of metal removal–I knew right away what to use.”

Boutin brought in Sandvik Coromant’s GC4305, a grade designed specifically for high-volume steel turning in the automotive sector, but equally suited for the railcar wheel. He worked with Lachance and his team to fine-tune the cutting parameters. By the time they were done, they’d increased the cutting speed to 450 sfm, the feedrate to 0.5 mm/rev (0.02 ipr), and the depth of cut to 5 mm (0.2 in.). The result? A twenty-minute reduction in cycle time, and a complete part using only one corner of the insert.

“We have been very happy with the results,” says Lachance. “We not only reduced the cycle time substantially, but have also developed a more stable process. The only thing I would add to those attempting similar results is that you need a very strong machine to handle cutting parameters such as this, a task that is well within the Mazak’s capabilities.”

Looking forward
This is but one example of the continuous improvements common at OSI Précision. Another is the recent acquisition of a six axis, seven metre (23 ft.), robotically loaded vertical machining centre from Spanish builder Correa S.A. that’s sold by Elliott Matsuura in Canada. Michaud says it’s helping the company reduce setup times and attract new business (and yes, it’s equipped with Sandvik Coromant tooling). “There aren’t too many companies with a machine this large or this capable,” he says. “With the Correa, we’ve become very active with many different industries–there is a big demand for very large, complex parts, which was the main reason we invested in the machine. Since its installation in August 2016, it has become quite busy, and is now bringing us a nice return. And the ironic part is, we didn’t have any work for it when it was ordered.” SMT