Job shops Ontario – Made to Measure

From its inception in a tough climate, Advantage has been increasing its high precision and automation repertoire

Some success stories get their start in times of adversity. That’s the case for Advantage Machine & Tool Inc. of Mitchell, ON, about 90 minutes’ drive west of Toronto. The company was founded in 1992 as a sole proprietorship, during the economic downturn of the early 90s.

At the time there was strong demand for quality machining thanks to a serious shortage of skilled machinists and widespread downsizing across many industries. Founder Mike Kelly saw an opportunity to leverage the reputation and broad network of contacts he had developed over many years.

It didn’t take long for his decision to be vindicated. Starting out in rented shop space, within a year Advantage had to move to a larger space at its current location. In 1999, after steady growth, Advantage bought the 10,000 sq ft premises outright, expanding the office and plant facilities to accommodate growth.

Advantage was incorporated in 1996 and ISO 9001:2000 certified in 2004. In the last few years the company has purchased a number of high production machining centres and hired 20 new employees, bringing total payroll to 60. 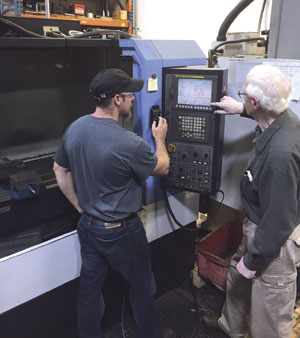 The aerospace and automotive markets account for the largest volume of business, Zurbrigg says, though the volume of agriculture and medical work is also significant. Advantage’s repertoire includes tools and dies, jigs and fixtures, welding and light fabricating, prototyping, and complex gauging.

The company has seen significant growth in automation projects. “We’ve definitely grown that side of the business,” Zurbrigg says. “We’ve done projects as large as over $1 million, in terms of modifications or rework projects. We have a complete controls group here that does our programming: full PLC-based automation projects.” 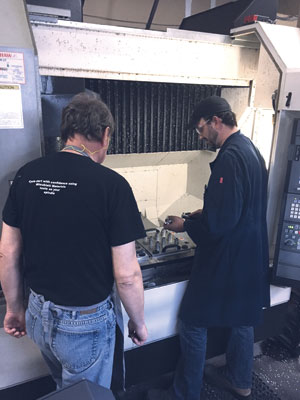 Assembly machines probably account for the largest portion of automation projects. “The customer will come in and have three or four parts that need to get nested together, that need to get staked or glued. We’ll look at improving their efficiencies so that an operator in their plant isn’t doing it; we assist them in getting some automation in the process.”

Advantage has been doing prototyping for a long time, and includes work for an automotive supplier’s new parts R&D. “When it comes to the prototyping, we do pretty much everything,” Zurbrigg says. “We provide brackets, inserts… all sorts of items that they need as they’re developing parts.” The amount of work has been growing, not only from that particular supplier but from a growing range of other customers as well.

“We have a lot of people come in and ask for one-offs–in all the main industries that we serve,” Zurbrigg says, “but automotive and aerospace are probably the main sectors where we do prototyping projects for customers’ R&D operations.” The prototyping is backed up by Advantage’s design and in-house CNC programming capabilities.

The complex gauging work is generally high production automotive work. “This is where somebody’s producing an automotive part and they select a control plan to check 100 per cent or one every hour,” Zurbrigg says.

In many cases the gauging is required for aluminum base plates that a part nests into, where feeler gauges perform hole position checks and spread checks, and check the overall tolerance of the part at it is nested in the base plate. Advantage does some complex gauging for aerospace as well, and those volumes are growing too.

“Medical parts provide steady work for us, but it’s maybe five per cent of what we ship,” Zurbrigg says. “And that’s five per cent in monetary terms, rather than in number of parts shipped. These are typically fairly costly parts with a high degree of precision. So while we may only ship five a month of a certain part, a lot of detail work has gone into it and some of the materials may be a bit more exotic and expensive.” 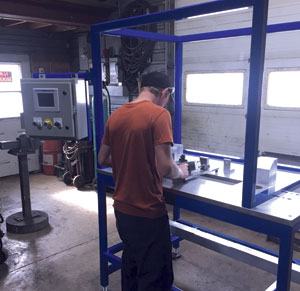 The biggest recent change for Advantage has been the adoption of an increasing volume of aerospace work, beginning a couple of years ago.

“We dabbled in aerospace before that, but–the same as a lot of companies do now–we’re doing a lot of online bidding and sourcing, and we won some aerospace contracts that way. We got involved with one company in particular, and the work we do for them has grown our business in aerospace by a large volume.”

With the increased volume of aerospace work has come an increased emphasis on quality control. Advantage’s QA operations are anchored by a Mitutoyo F805 coordinate measuring machine (X 22 in., Y 32” in. and Z 22 in. measuring range).

“We’ve really grown on the quality assurance side. We now have four people who do what I’ll call deeper and first inspection, and then we have three final inspection operators for the main aerospace work, which needs almost 200 per cent visual inspection on a lot of these parts that are the size of thumbtacks. We had maybe one or two people a few years ago and we’re now in the neighbourhood of seven or eight today.”

A total of six new large machines have been added over the last few years, Zurbrigg says. The latest, a Tsugami Swiss machine, arrived last March, joining one that had been purchased earlier for high volume, high precision work.

In addition to the two Tsugami turret machines, the company has added two high-production Okuma Genos M560-V vertical machining centres and two Okuma LB3000ExII CNC lathes over the same time period. The Genos machining centres can accommodate a range of materials from titanium to aluminum, and have a maximum machining volume of 41.34 x 22.05 x 18.11 in., with a table size of 22.05 x 51.18 in.