In the Right Place

The biggest story in portable metrology–as in so much else in manufacturing–is automation, specifically the communication of metrology data directly from the measuring device back to the machine control.

One of the advantages is the elimination of human error that can enter the process when a human operator has to enter the data manually. Another is greater speed of measurement and data communication. Automation can deliver greater accuracy of measurement, which in turn reduces reliance on secondary inspection in a QC lab. 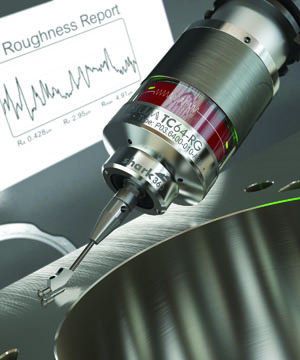 “Unfortunately two things have happened by the time [an off-spec] part reaches a traditional quality lab,” says Jamie King, regional manager, Canada, for Blum-Novotest. “The part is either a unique one-off that will now require costly rework, or it’s a production run and there’s a good chance that between the machining of the part and the inspection, several others have been machined with the same defect.” These scenarios are still too common, and stand to lose job shops a lot of their profit.

“The benchmark for accuracy is of course a CMM,” says Kalkunte Srinivas, business manager–3D Scanning, Industrial Metrology Business Group, Carl Zeiss Industrial Metrology. “Everybody still needs the CMM because it is operated under a controlled environment–it’s accurate as you need it to be. But when you go into a shop floor dynamic, things change.” Factors include vibration, temperature, contaminants and other variables. As Srinivas says, the goal of portable metrology on the shop floor is to get “application accuracy”–not necessarily equal to lab conditions, but what’s needed to determine whether the part meets the demands imposed by its intended application.

It was a specific application demand that led to the development of the Zeiss T-Scan system, a handheld laser scanner with a tripod-mounted three-lens infrared camera that locates the handheld device precisely as it performs the laser scan. Auto maker BMW wanted a scanner that could validate the geometry of the soft elements in an automobile, such as the leather or fabric of car seats. These couldn’t be measured with a contact probe, but the T-Scan, and another optical scanning system called the Comet, were able to generate the same quality of data as a hard gauge.

“The operator movement is the same as painting a wall,” Srinivas says. “The laser line is just like the roller for the paint. You sweep that line across the part to get a representation in three dimensions.” The tripod mounted infrared camera meanwhile zeroes in on a series of infrared diodes mounted on the handheld scanner, tracking its position precisely so that the measurements the laser delivers can be triangulated. The Comet is similar, although it uses LED sensors and there’s no handheld component, just the tripod-mounted camera.

Portable optical scanning has a couple of advantages. The number of data points is theoretically infinite, and because it operates by line of sight, the range of part sizes is potentially much greater than a CMM that is limited by its table size. and the operator requires no training at all.

“When you look at small to midsize job shops, 10 to 50 employees, you want to give the workforce a piece of equipment that’s easy to use,” Srinivas says. “When I do demonstrations I say ‘whether you buy it or not, you’re already trained on it.’”

Another approach to portability is evident in the Equator system from Renishaw. The company defines Equator as a high speed comparative gauge for mid to high volume manufactured parts. The system is small and light enough to be moved manually from one place to another on the shop floor. It can also be mounted on a wheeled trolley that accommodates a protective enclosure.

“It’s very flexible in terms of changes,” says Dr. David Chang, business manager for gauging products at Renishaw. That flexibility means it can replace the custom gauges that large customers like Linamar or Magna typically use as one-offs. Each gauge is designed to scan a single part; when that part is modified or replaced, the gauge itself is redundant. The demand for a flexible system that can be endlessly ‘customized’ led to the development of the Equator.

“This system basically does the job of a custom gauge,” Chang says. “It can do the job that a CMM does and it’s flexible. The user can check various parts, or a family of parts. It’s easy to use and it has the benefit of a hard gauge–so it’s like a hybrid.”

Closer to QA
Mitutoyo Canada Inc. offers a range of height gauges, which include its QM-Height and Linear Height (LH-600) series. These fit the definition of portability but, says business development specialist Erin Farmer, they provide the accuracy of a conventional static CMM.

“The accuracy of these devices is similar to a CMM, but the functionality is different,” Farmer says. “A CMM offers immense capability and functionality. These specific height gauges have a limited function, but as long as it’s in the right situation and the right customer–and they’re measuring a few specific dimensions, then this is something that they might look at purchasing before investing in a CMM or reducing the workload of their current CMM.” 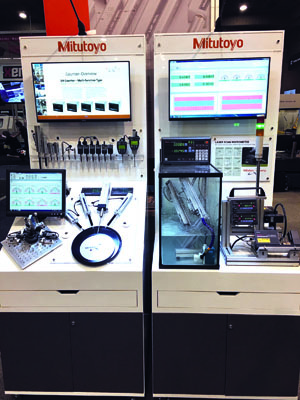 Mitutoyo’s portable tools, height and linear gauges, CMM SpinArm, calipers and micrometers, offer different degrees of portability. “But the one big thing all of them have—and what the industry is looking for today—is the ability to output that data somewhere,” Farmer says.

“Now when you’ve measured a dimension you can export that data to SPC software like our MeasurLink package, where you can actually start to trend and evaluate data.  Say the part you’re measuring is gradually starting to get bigger and bigger; that may mean something’s wrong with the tooling. It’s another way of analyzing a process and trying to improve processes and reduce scrap immediately. Instead of sending the part to a quality lab on the end of the line, we’re now talking about online and/or in-line immediate data capturing and process modifications.”

One of the key elements of the Industrial Internet of Things (IIoT) is machine-to-machine communication, so that the data relay process Farmer refers to can be translated into immediate remedial action at the machine tool, where an offset can be entered without human intervention. This development is taking place at the software level, and during the development and manufacture of the machine tools themselves.

“You might have 10 different machine manufacturers–Köhler, Mazak, Makino and so on–and they use a few common controls,” says King. “There are major manufacturers like Fanuc who make those controls. The key is being able to communicate with the control. As long as you can do that you can communicate with all the machines that use that software.”

The real challenge is what to do with the data once it’s collected, King says, and this is where automation can reduce errors. “Far too often, companies are having an operator interpret the feedback from the measured part and transfer it in to an offset adjustment. You can’t take all these steps to ensure your quality, and then leave the door open for human error in interpreting and transferring simple data.” One of Blum-Novotest’s responses has been to bring to market a program called AutoComp, developed by Caron Engineering, which communicates adjustments from the gauge to the machine control.

Automation always costs more when it’s new, but the normal technology curve dictates that those costs will decline over time, and the pattern holds true with portable metrology. “Costs have come down,” King says, “but more important is the need to make quality parts the first time. This really justifies the ROI. If you aren’t investing in new technology, be careful because your competitors probably are.” SMT