Robots and humans working together for perfect pipe welds

The SWR system from Novarc Technologies uses robotics and human input to speed up pipe welding and reduce errors and defects in the welds. Developed in the company’s North Vancouver work space by Soroush Karimzadeh, MBA, P.Eng and Reza Abdollahi, the system is the world’s first collaborative welding robot designed for arc welding in pipe applications.

Unlike conventional robotic cells, “the Novarc SWR does not need robotic programming, which is typical for conventional six axis robots,” says Karimzadeh. “The welders simply select the procedure they want to use on the HMI (Human Machine Interface). As a result, they can start welding in less than three minutes.”

The genesis of the Novarc system was to fulfill a need for pipe welding shops.

“The idea behind SWR started by working with a pipe shop who wanted to automate this process,” says Karimzadeh. “They were looking for a solution that could weld pipe spools up to 30 ft long, took up a small footprint in the shop, could accommodate forklifts and cranes, and did not need fixed guarding. Equally important was the need to have a solution that was easy to operate. Based on these requirements, we made a prototype of the SWR, which was well received by the local welding community.”

He adds that based on the feedback and testing, they made many iterations on that original prototype, before coming up with the current design.

An early partner with the project was Lincoln Electric. 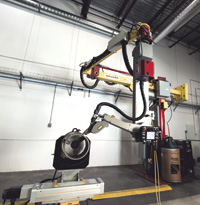 “It’s probably going on four or five years since we started working on this whole concept,” says Ken Mui, district manager for Lincoln Electric. “I knew Reza Abdollahi from way back and we saw huge potential with this. This is a game changer. So early on we provided technical support, equipment and all the technical expertise, so it was support on an R&D basis.”

“It’s a collaborative robot, which is very different from Lincoln’s current offerings. A lot of other people have tried it, a truly programmed robot where you tell the robot to go in and weld a pipe, with varying degrees of success,” he says. “The reason for that is, with pipe welding there’s a lot of variation when you fit up a pipe. That’s the beauty of this system. The robot is being controlled in real time by a human being. This is different from programming a robot. If you set up a regular robot to weld a pipe, it can’t necessarily see changes in gap or poor joints.”

With human support, it lends support to the process and helps to steer the robot, adds Mui.

In the Novarc SWR system, the human operator can guide the robotic weld head to correct the imperfections of the pipe or the fit in the pipe joint.

“So it’s collaborating with a programmed robot. That’s why it’s cool, because it’s an interesting bridge of a robot that doesn’t know better to now having a human who’s way smarter than a robot guiding its way.”

The system is easy to use, says Karimzadeh.

“Technically, novice welders can weld with the SWR as the training is less than half a day and they just need to know the basics of welding. But, in some cases, shops require certified welders due to the requirement of their QA process.”

Either way, Novarc’s collaborative robot works with human operators to enhance their skill, and it’s not taking jobs away from welders, but rather allowing less-skilled operators to do the jobs that highly skilled welders did not want to do. So it solves the labour gap, explains Karimzadeh.

Although the system has a small footprint, it can weld in a large arc. “There are buttons in the back of
the welding lens that allows the operator to release the brakes on top. So the operator presses the buttons, walks with the welding arm and brings it where the joint is, anywhere in a 15 foot radius from the base,” explains Karimzadeh.

Once the operator positions the torch in the middle of the joint, he can select the type of pipe to weld and the welding procedure from the screen. All of the parameters are preloaded for all the passes.

“By parameters I mean the travel speed, the voltage, welding modes, all those things are already in there. They can review pass by pass, making sure it meets their requirements. If they want to make changes they can do so before they start the weld and then they just hit start. That basically loads all those parameters in the machine. Then grab the pendant and fine tune the position of torch and they can turn on the seam tracking and the distance controllers on. What that does is similar to the cruise control in your car.”

Using the system is simple.

“You turn it on and set a set point for where you want the torch to be held. Then just hit start on the pendant and the machine starts welding.” 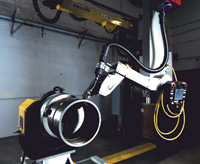 Lincoln and Novarc say the collaboration of human welder and robot works seamlessly.

“Novarc has figured out what the robot should decide and what the human should decide,” says Mui. “And through a very high end vision system, it has now outsmarted what a welder can do. So a lower skill level operator can weld with a Novarc collaborative system better than a highly skilled experienced welder could do with a handheld weld.

“And we’ve proven this because every time we’ve brought clients to see this system, and some of these guys aren’t even welders, with a two-minute tutorial this is how the thing works and here’s all you have to do, they are putting in good welds. You get guys with very little skill level creating pro quality welds.”

Designed for pipe spools from 4 to 48 in., and up to 30 ft long, the SWR with a GMAW-P head is efficient up to 1 in. thickness. Its strength is making welders more productive.

“A junior welder with SWR can tackle as much work as two to three skilled welders minimum and free them up to do position welds,” says Karimzadeh.

The SWR system increases the shop throughput, lowers the welding cost per joint and improves the weld quality. According to the company, shops migrating from stick welding to mechanized weld using Novarc’s SWR can achieve a four-times gain in productivity.

“The increase can be even more. The gained productivity depends on the shop’s current welding process,” explains Karimzadeh. “Currently there are a variety of ways that shops weld their pipes including stick welding, GTAW root and FCAW fill and cap as well as GMAW root to cap. Average productivity is also affected by a welder’s efficiency.”

Novarc has systems in place in its home province of BC, as well as in ON and in Wisconsin.

While Novarc’s SWR system is currently focused on welding pipe and small pressure vessels, Karimzadeh says the company plans to expand the concept to other welding applications.

“We have plans to have future robots based on the same platform for other welding applications. Currently we can offer SWR with TIG as well as dual torches for GMAW or MCAW root and FCAW fill and cap. We are working on adding more options and capabilities to the SWR system.” SMT