Power isn’t the only factor that determines a machine’s efficiency, adds Al Bohlen, president of Mazak Optonics Corp. “This is a crusade I’ve been on for years to educate customers in the way you control the laser beam itself–change the mode, the shape of the beam, the heat distribution in the beam itself. Is the heat more centralized at the centre of the beam? Is the heat dispersed out to the outer edges of the beam? If we tend to follow these things we could make a 2,000 watt laser perform like a 4,000 watt laser.”

And adding a bigger power source in an inefficient machine will not necessarily make it better, explains Bohlen. Indeed, he says manufacturers like Mazak Optonics have learned how to manipulate the laser beam so that today’s 2 or 3 kW laser beams can now cut thicker materials that would have required a higher power laser cutting machine.

“If you want to cut one-inch stainless steel, you need lots of power, but the majority of our customers are cutting mild steel in medium range thicknesses, and even in mild steel we can cut one-inch plate with 2,000 watts with no problem.”

Solid state leads the way
“What’s revolutionizing laser cutting right now is the advent of fiber technology,” says Eric St. James, president of Paramount Machinery, the Canadian distributor of the Eagle fiber lasers. “You’re talking 35 per cent of the power consumption compared to CO2 and a vastly simpler maintenance regimen in so far as there are no moving parts, no resonators, there’s no more mirrors. So overall operating costs are cut in half.”

The evolution of fiber technology is making these systems smaller. “We’re getting more power out of smaller packages. It really becomes a question of shrinking the resonator,” he says. “Prices have definitely come down. I think it’s probably a combination of margins shrinking as the technology becomes more prevalent. And simply because due to volume, prices are going down.”

Fiber lasers are getting smaller and more efficient because companies are creating larger power modules with fewer components. “In the beginning, we would take a series of 700 watt modules and and combine them to create a 4,000 watt laser with as many as six modules,” said Dustin Diehl, laser division product manager for Amada America. “What we’re currently at is about 3,000 watts per module so that allows us to have one module in a 3,000 watt laser, two in a 6,000, three in a 9,000 watt, so fewer components producing more power. You need fewer components inside. And the components inside of the laser diodes are the pumps themselves and we’ve been able to reduce this from as many as 90 in a 700 watt module to as few as 24 in a 3,000 watt module. We’re getting a lot more power in, better efficiency out of each diode thus creating fewer modules necessary to create the same amount of power.” 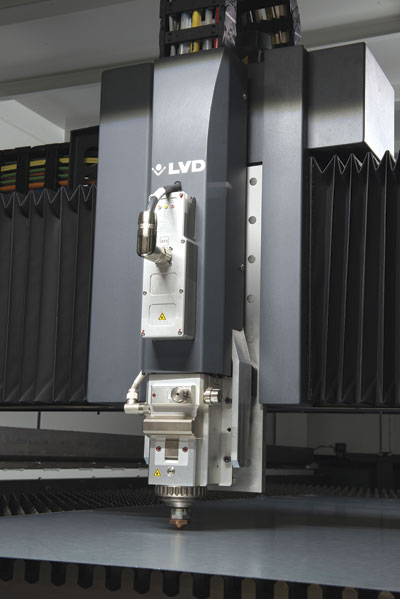 Beyond the power source
Power source is important, but efficient delivery of that laser is equally important. “You have to have a very solid frame to take away the harmonics,” says Donald McDonald, product specialist for Alpha Lazer. “Then you need a good drive system and a quality resonator. It’s the whole package you have to take into consideration. We use helical rack and pinion. The reason for that is you’ve got more of the pinion in contact so there’s less backlash. That gives a highly accurate positioning system whereas  in the past with plain rack and pinion, you used to have a little bit of backlash back and forth because you only had one tooth driving. Nowadays with the helical, you’ve got a lot more teeth combining with the drive. That also comes into play with the torque for acceleration and deceleration speeds, essential for the fiber lasers to cut quickly.” 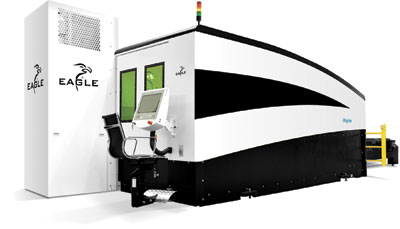 With higher cutting speeds, the rigidity and accuracy of the drive becomes nearly as important as the quality of the laser or its power. “Obviously, the higher the power the faster you can cut,” says St. James. “You need a drive system that’s going to be able to move the head at those speeds. With a 12 kW laser, we’re approaching top speeds of over 2,000 ipm. Our machines use linear drives for starters so there’s no loss of efficiency through ball screws or gear drives. It’s direct transmission. And these linear drives permit very high rates of acceleration and deceleration which in turn leads to shorter cutting times because the drives ramp up the maximum speed so much faster without loss of accuracy.”

Adjusting and focusing the laser beam can help improve the cutting process. 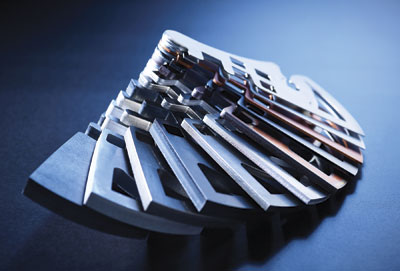 “LVD fiber lasers feature an advanced cutting head design that provides automated adjustment of focus position and focus diameter,” says Colle. “Because of this ‘zoom focus’ capability, which is controlled by the CNC, the laser cuts at the highest possible speed and with the highest quality edge finish, no matter the material. The latest fiber laser cutting machines feature drive systems able to deliver dynamic cutting performance when processing large format sheets.”

Most customers purchase laser cutting systems because they’re more efficient and more flexible than most any other cutting solution.

“They have a lower cost of operation. They don’t require a lot of maintenance,” says Bohlen, although he cautions many customers are concerned with the cost of nitrogen as a cutting assist gas. “We continue to mature the way we’re cutting with a fiber laser and now we’re using a new novel technology, a direct diode laser. We’re using new cutting techniques to lower the nitrogen consumption. So, you’re still getting the advantages of solid state laser and there are still speed advantages. We’re not negating the speed advantage but we’re finding new ways to deliver a less expensive cutting process.” SMT