Waterjet cutting is appealing because it is both environmentally sound and versatile–you can use it to cut just about anything–but for metalworking it has faced a challenge over the years: it is most common in flat plate applications, with limited applicability to multi-dimensional environments. But that’s changed.

“To understand what is happening in the realm of multi-axis cutting today, you need to go back in time,” says Tim Fabian, manager, global product management at Flow International in Kent, WA.“Back in the mid 1990s, waterjet was a fringe process adopted by very few businesses with highly specialized applications. The systems were all G-code programmed which made it very difficult to accurately program a machine that had a non-rigid, flexible tool–a high-pressure steam of water.”

Flow helped move the technology forward with its Flowmaster control system, which allows an operator without any waterjet knowledge to enter in the material type, thickness, and desired surface finish. From there, the Flowmaster control can automatically create a part.

Nonetheless, multi-axis systems continued to languish despite having been around since the early 1980s, because much like the early 2D systems, they were still difficult to program and not very accurate due to taper.  Flow helped solve this, too, when it introduced its Dynamic Waterjet in 2001, which eliminates taper in the cut. From here the company moved to Dynamic XD in 2009 for multiaxis waterjet.

“Multi-axis waterjet is seeing similar growth to what 2D systems experienced over the past ten years,” says Fabian. “Dynamic XD can be programmed to allow a customer to open up a solid model directly into the FlowXpert control before creating an optimal program and accurate part.”

For waterjet, this new world of programmed multi-axis cutting brings with it the standard advantages that the technology has in 2D applications.

“The biggest advantage of waterjet cutting over other types of cutting such as laser, plasma and flame cutting is the fact that it is a cold and clean cutting process and there is no HAZ – no heat affected zone,” says Chris Henning, owner of Allcut Waterjet Service Inc. in Kitchener, ON.

Allcut, which was established in 2001, specializes in lower volume cutting, which can be from one prototype part up to hundreds of pieces.

“Waterjet allows for a fairly fast turnaround on a wide variety of materials and quick setup times” says Henning. “It is a clean cutting process that is virtually burr free, with minimal secondary finishing required. It also leaves material properties unchanged for secondary processes such as milling, threading of holes etc.”

Jet Edge is another company that, like Flow International, is extending the capabilities of waterjet cutting. Notable is Jet Edge’s Permalign Edge technology that allows for beveling up to 55 degrees per side. 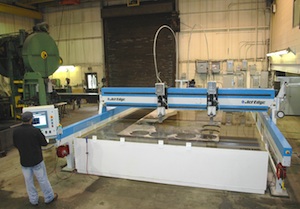 Wirtanen says that Jet Edge’s AquaVision Di motion controller has an open architecture that allows the operator to fine tune programs from any software utilizing standard G and M codes.

“Some proprietary software focusses completely on automating the design-to-cutting process,” says Wirtanen. “Our software does this, but also allows the freedom to fine tune.”

Though Jet Edge offers its own programming and nesting software, Wirtanen says that many of the company’s new customers are able to utilize their own, in-house software, which saves on training and preserves the initial investment. From here, job shops can continue to leverage waterjet technology’s diverse capabilities, such as cutting 15 in. titanium one moment, and foam the next. 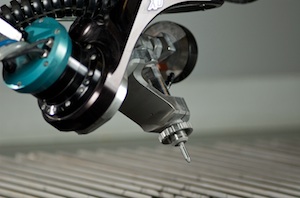 But not that many industries have such dramatic requirements. Instead, what often happens is that a best practice in one industry becomes standardized in others. One industry where the advances made by companies like Flow International and Jet Edge are making their mark is aerospace, which has always been an early adopter of waterjet technology.

“This is good news, because the aerospace industry ushers in future technology across a wide range of industry,” says Fabian from Flow. “Aluminum, which at one time was only common on aircraft, is currently used in many industries.”

Fabian expects the composite industry to take the same path, and says it won’t be long before we see composites replacing aluminum and other materials.

“Waterjet can be effective during this transition because it’s a process that doesn’t care what material it is cutting,” says Fabian.  “Aluminum, glass, ceramic, hardened tool steel, composites – all these and many more are easily cut with the exact same waterjet machine.”

Specific to metalworking applications, many shops see value in using waterjet to take some of the load off of their higher value mills or lathes.  Customers with expensive machining equipment may want to produce blanks with a waterjet and finish them off on a mill.

“I knew a shop that was working with an aerospace alloy that was five inches thick,” says Jet Edge’s Wirtanen. “They were milling out large pockets just to produce the basic shape of the final product.”

Result? They were tying up a $2 million machine and eating up cutting tools at a rapid rate.

“With a $300,000 waterjet system they freed up the milling center and produced the blank shape in a fraction of the time.”

All in the family

P.V.A. Enterprises Inc. is a diversified family-owned company based in Concord, ON. It supplies and manufactures foodservice equipment and metal fabricated products, produced in its waterjet cutting job shop that includes multiple related design, fabrication, and installation capabilities.

In 2003, the company purchased a Calypso [Calypso was acquired by JetEdge in 2009] abrasive waterjet cutting machine, and hasn’t looked back.

“Waterjet cutting technology was cost effective and excelled at cutting the variety of materials that we routinely use in our production,” says Paul Gambino, vice president. “We wanted to provide cutting services in order to increase our diversification into new markets.”

Gambino says that for the company’s custom and contract metal product business, waterjet cutting enhanced quality and precision.  It also increased the efficiency of the manufacturing process.

“In order to properly serve the foodservice customer base, it is essential to have technical expertise in design, metal fabrication, food equipment options, typical interior materials and construction protocols,” says Gambino.

On the waterjet cutting and metalworking side, PVA provides cutting service for short and long run orders and manages secondary finishing processes for materials in numerous industries. The company’s Calypso Shark 612 waterjet cutting machine has proven its staying power, whether for high production or limited runs. It runs at 60,000 PSI and relies on a 60 horsepower pump. Dual heads are also an advantage.

“Pivoting heads are becoming the norm, with the latest features in waterjet cutting allowing bevelling or simply eliminating taper,” says Gambino. “The waterjet industry will continue to increase the pressure of the water in the future to minimize the amount of garnet required and to increase cutting speed. This all means less cost per cut.”