The power to pierce

With laser cutting, nothing happens until the beam passes through the sheet. Achieving this quickly and accurately leads to high productivity and reduces the cost per part. Piercing, however, historically has been the slowest part of the laser cutting process, and often meant stopping the machine early in the cutting cycle to clean the workpiece surface of the slag and debris caused by molten metal being ejected from the hole. Thanks to fiber lasers, those days are largely gone.

Have a blast
“With CO2 lasers, it’s always been an endeavour to cut reliably without first using the pre-pierce technique,” says Mickey Lawson, senior applications engineer for TRUMPF’s North American laser group. “This is especially true on heavy materials, say 16 mm (5/8 in.) and thicker. Here you turn the beam up to 100 per cent power with a high frequency and just blast away. It provides nice, round holes but also means stopping the machine to sweep away all the spatter before processing the rest of the sheet.”

This “blast-pierce technique,” says Lawson, is mostly unnecessary with fiber lasers, which pierce far smaller and more accurate holes than do CO2 lasers. “We have greater control over the beam. It’s well-focused and smaller in diameter, and provides a hole roughly half the material thickness, around half that of CO2.”

Fiber lasers can perform more complicated piercing routines, he says. Multiple frequencies and power settings, offset height adjustments, or even modification of the beam focus can be done automatically, even while the machine is cutting. 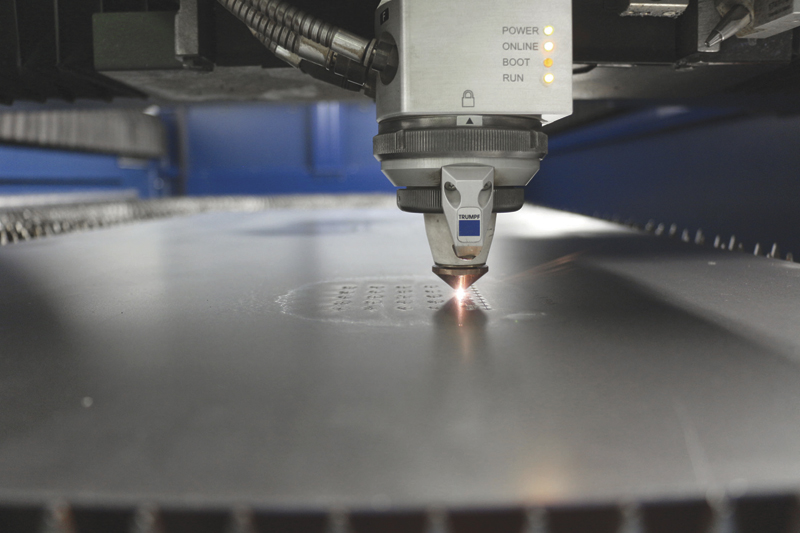 “For every material the laser can cut, there are preset parameters resident in the machine control,” Lawson explains. “These offer a choice of faster, more aggressive pierces, or slightly slower but more accurate ones. TRUMPF has done all the background work necessary for efficient cutting, so there’s no need for the operator to dial in the machine for every application.”

Frank Arteaga, head of product marketing at Bystronic, says the piercing technology offered by some machine tool builders is amazingly different compared to even five years ago, and what once took 12 to 14 seconds to pierce can now be done in a little over one second. He points out this is not so much a factor of laser power (although this does play a role) but is more due to improved regulation of the laser pulse, something Bystronic calls RPP (Regulated Pulse Pierce).

Arteaga warns, however, that shops evaluating a new laser purchase would do well to look beyond pure technical specifications. “Pierce times, feed rates and rapid traverse figures are important, but they don’t tell the entire picture. For example, acceleration and deceleration must be considered, especially where the work requires short positioning moves. And the ability to determine when the laser has finished piercing and can move directly into the cut adds up to significant time savings. Our advice on any new purchase is to validate the equipment through an initial time study, followed by confirmation of that data with a live demonstration.”

No more guesswork
The ability of modern lasers—both fiber and CO2—to detect when the pierce is done eliminates the “is it through yet?” guessing game of yesterday’s less capable machines. Tim Tapper, supervisor for product development at Mazak Optonics Corp., says this can reduce processing time substantially with sheets containing large numbers of parts or multiple piercings, and in very thick materials. 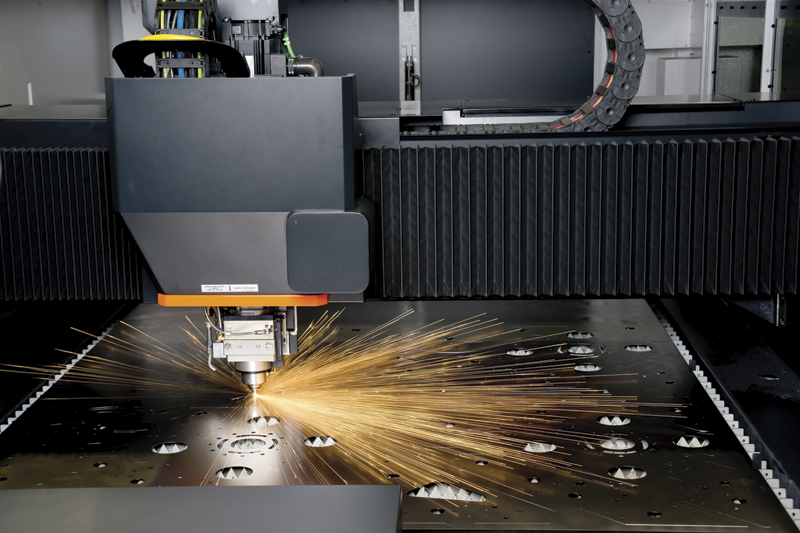 “The time it takes to get through the material varies as the composition changes. So in the past, you always had to set the machine for the worst-case scenario. For instance, piercing 19 mm (3/4 in.) thick steel on a CO2 laser could range between 7 to 14 seconds. Pad that by a couple of seconds and there will be times when the machine sits motionless at the end of each pierce for 6 or 7 seconds. Today’s machines can detect the moment the beam pops through the material, and switch immediately into cutting mode.”

Tapper says the CO2 market is alive and well at Mazak, but agrees that many of the new developments are taking place in the fiber end of the business. The company has developed its multi-control torch technology, designed specifically for fiber lasers, which among other enhancements provides greater efficiency in piercing.

One of these is a function that automatically removes the spatter that comes with fast pierces. “As soon as you jump into aluminum or stainless, there is typically some small amount of spatter on the surface no matter what you do,” says Tapper. “If the operator sees there might be cutting interference because of that, he can go into the material library and flip a switch to force a small pilot hole to be cut, followed by a cleanup pass. The area with the spatter is removed and the debris falls through the sheet.”

There’s also an option to defocus the beam after a spatter pierce, using a short burst of energy like a magnifying glass on paper to melt away the small donut-shaped mound of material at the top of the hole. Mazak Optonics has also found it advantageous in some cases to use different nozzles for cutting and piercing. To accommodate these situations, some machines are equipped with automatic nozzle changers. Tapper admits this adds “less than 10 seconds to the total cycle time of the nest or sheet,” but says this is easily regained through faster pierces and more efficient cutting overall.

The big picture
Jason Hillenbrand, laser product manager with Amada Corp., agrees the correct nozzle can dramatically reduce cycle times, but suggests there’s more than one way to skin the laser-cutting cat. “Piercing is obviously the biggest waste of time in the process, so the more you can reduce it the better. If the machine has an automatic nozzle changer, one option is to go through and pierce the entire sheet with one nozzle, and then come back and cut with a different nozzle designed for better edge quality and optimal cutting speed.” 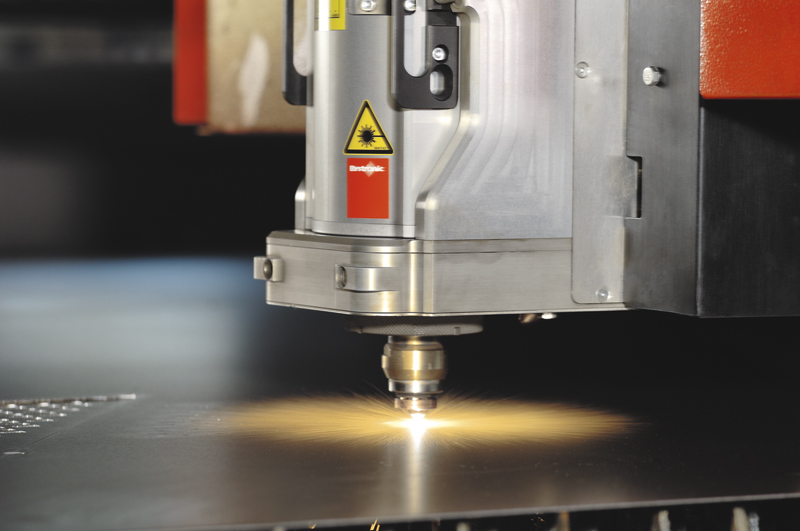 Another option is a “best of both worlds” nozzle, says Hillenbrand. “Amada, and I assume other companies, have developed nozzles with proprietary internal dimensions and geometries that help regulate gas flow, making it more consistent and less turbulent as it emerges from the tip. When to use these nozzles depends on the material and its thickness, but in many cases this newer technology works equally well for both piercing and cutting.”

Switching gases midstream is another way to improve piercing efficiency, he adds. Starting the pierce at maximum power with nitrogen as an assist gas, then changing to oxygen and dropping power just before breakthrough can cut pierce time in half while producing “a very nice pierce hole.”

Piercing is important, but there’s more to laser cutting than blasting a bunch of holes in a metal sheet. Hillenbrand says the big trend in today’s fiber market is “more power, more power,” but warns this may actually decrease machine utilization in certain applications. “These lasers are getting so fast now that they’re dramatically affecting downstream processes such as bending and welding. The bottleneck has moved, and companies have to invest in the technology to match the output of higher wattage fiber machines.”

Capital investment must be evaluated based on the demands and capacities of the facility, the type of work being done there, and future expansion plans, he points out. Much of this investment may revolve around material handling, or other forms of automation. Another consideration is the improved edge quality achieved when using nitrogen gas on high power fiber lasers. This eliminates the oxidation that comes with oxygen-based CO2 lasers, allowing parts to avoid five-stage wash systems or other types of edge cleanup and move directly onto welding or powder coat.

Quite often, it’s these secondary processes that determine which laser machine is most appropriate for a given situation,” says Hillenbrand. “Piercing and cut speeds are important, but you have to look at everything.”

Bystronic’s Frank Arteaga offers one final consideration, something the company calls Fibernomics, or the economics of owning a fiber laser, which is built on the premise that fiber lasers are a game changing technology in terms of reducing operating costs and producing high cutting speeds and lowering the cost per part. But Fibernomics is also the economics of how all of the supporting software and machine technologies work together to take advantage of the fiber lasers’ increased productivity.

“The pull on the front end lies with the business systems that handle orders, the breakdown of those orders by the production planning system and the nesting system that eventually produces the CNC programs that run on the fiber laser cutting machine,” says Arteaga. “Material handling is also part of the pull demand, as raw materials need to be made ready prior to processing. The push demand lies in the systems directly after the fiber laser cutting process, as material handling systems and press brakes must keep up with the increased productivity of the fiber laser. All of these demands must be given careful thought and planning before purchasing any fiber laser or automation system if shops are to make the most of their investment.” SMT