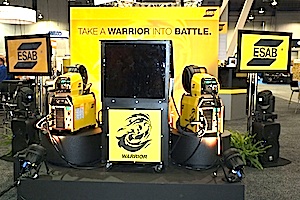 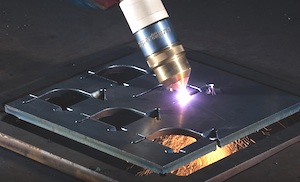 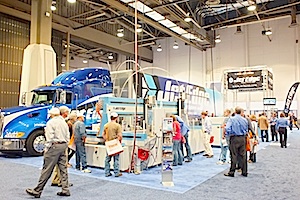 Many exhibitors also played up the “made in America” concept, driven in large part by the ongoing focus on the country’s reshoring initiative (Canada’s version is the “Take Back Manufacturing” initiative being spearheaded by the Society of Manufacturing Engineer’s Toronto chapter).

With the backdrop of lagging economic recovery, a shortage of skilled workers and apprehension about the fiscal cliff the US is teetering on, it came as a surprise to many exhibitors to see the interest among manufacturers. Indeed, many exhibitors Shop Metalworking Technology spoke with said they had sold several laser and waterjet machines at the show.

Nowhere was the theme of “more power” more evident than in the line-up of fiber laser cutting machines. Last year the emphasis was simply on the benefits of fiber laser technology in thin sheet metal, but this year, the focus was on higher powered fiber lasers 3 kW (Hypertherm, LVD Strippit, Mitsubishi,), 4 (Amada, Bystronic, Mazak Optonics, Prima Power) and 5 kW (TRUMPF) machines that extend the benefits of fiber’s fast cutting capabilities in thin sheet metal to thicker sheet metals up to 3/4 in. (19.05 mm) thicknesses for the 3 and 4 kW units, and up to 1 in. (25.4 mm) thickness with the 5 kW model. 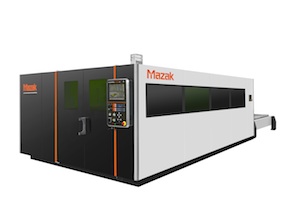 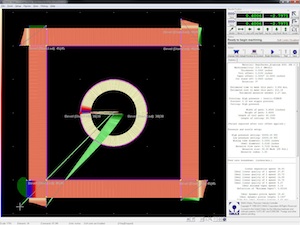 In welding, a big concern for welders is ensuring they have durable welding systems for work in harsh welding environments. To address this, ESAB unveiled a new multi-process power source and feeder, the Warrior, which delivers 500 amps at 60 per cent duty cycle. Developed for GMAW (MIG), FCAW (Flux-Cored), SMAW (Stick) and GTAW (TIG) welding, the carbon arc gouges electrodes up to 3/8 in. (9.53 mm) diameter, welds .030 to 5/64 in. (7.62 to 2 mm) flux-cored and solid wires and has a full range of SMAW capabilities with excellent 7018 and 6010 performance. 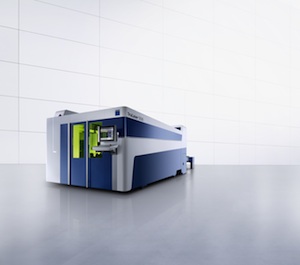 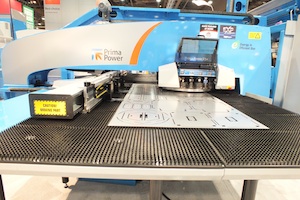 Describing it as “the best software that SigmaTEK has ever produced” and predicting it will “exceed customer expectations,” SigmaTEK Corp.’s president Ben TerreBlanche, says the company’s nesting engine has been revamped and enhanced to provide faster nesting capabilities. The new software includes 1300 changes, 200 of which are new features. To prove the point of faster nesting, the company tested it against the predecessor software Version 9.1 using a 1600 part nest and 23 sheets. The older version of the software took approximately 4.8 minutes to nest the last sheet. By comparison, using the same 1600 part nest and looking at the last sheet, Version 10 nested in 22 seconds. 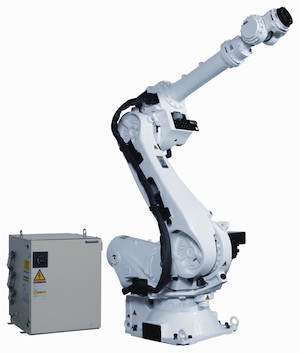 “Cutting mild steel is where the challenges are with laser cutting–uncontrolled kerf width, serrations, too much gas press, overheated material and burning defects are just some–and it is difficult to control these, but we have found the answer with this technology,” says Stefan Colle, laser product sales manager for LVD Strippit.

ALC uses a dynamic feedback system to monitor and regulate laser power, speed and assist gas pressure in real time during the cutting process, automatically optimizing cutting parameters and ensuring a consistently accurate cut. Unlike other process controls systems, ALC does not rely on pre-defined parameters but measures and adapts in process to achieve the optimal cutting results.

Improving productivity means investing in new technologies that the life of tooling and machinery, and offer flexibility and functions to improve processing speeds while cutting operating costs.

There were numerous examples of technologies that demonstrated this and some of note included Wilson Tool International’s Exacta Adjustable V dies for bending thick, heavy materials on a press brake. The technology allows operators to adjust the width of the V-opening using a single die, eliminating the need to purchase multiple dies with different V openings, a significant cost saving. Rather than changing out the die for each new bend, a single operator can adjust the V opening as needed by moving, then locking the side blocks into position. This greatly reduces changeover time and improves productivity. 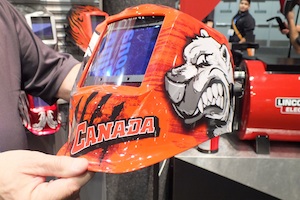 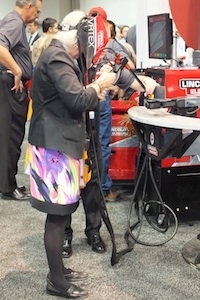 Perhaps one of the most significant ways to improve productivity is to incorporate virtual fabricating and welding into your process. It is much less expensive to make mistakes on a virtual machine and correct potential problems before they occur in the fabricating process. Such is the thinking with Lincoln Electric’s VRTEX, a virtual reality welding training system. The company officially launched the family of virtual reality arc welding training products at FABTECH. The interactive teaching tools work well for introducing new welders to the trade in a traditional classroom or in a manufacturing facility. The units allow students of any age to learn and train in a safe, virtual environment with realistic imagery and scenes, thanks to a specially equipped virtual reality welding helmet and rich, vivid graphics.

To extend punch tooling life, Mate Precision Tooling has launched a new tool sharpening system, Premia, an improved design on previous sharpening systems. John Galich, marketng manager, says the new system, which will be available in 2013, is a proprietary design equipped with new features such as an excellent filtration system. “The filters sometimes get clogged earlier than they should but we’ve developed a magnetic retention system and as the grinding debris comes out, it falls onto a magnetic tray and what is returned into the sharpening system is clean coolant, which helps to extend coolant life.”

Galich adds that the machine is CSA certified for Canadian customers.

Robotics and automation were on display at many exhibitors’ booth and among them were robotic welding units at ESAB (which announced its partnership with KUKA Robotics for robotic arc welding systems), Lincoln Electric and Miller. Miller introduced three new automated material handling robots– the HS-80, HS-165 and HS-200. Combined with the Panasonic G3 welding robot, the robotic system positions the material for optimum welding for a complete synchronized robotic solution for industrial customers. The common G3 pendant and language eliminates the need to learn additional robotic languages. One pendant handles the communication between welder and handling robot. The compatibility forms a symbiotic welding cell. The robots work in tandem to complete tasks thanks to the harmonizer function.