Making the things that people who make things need puts you in a pretty good spot in any supply chain. Canada’s mould, tool and die industry is always on the lookout for suppliers who can match its efficiencies and technological sophistication, and who are prepared to enter into close, collaborative supplier relationships with companies that have demanding customers themselves– companies that never make the same thing twice.

For job shops that fit the bill, there’s no time like right now. “Taking the last couple of years as the focal point, the industry is in a historical period of growth,” says Jonathon Azzopardi, president of Laval Corp. and chairman of CAMM, the Canadian Association of Mould Makers. “This is a good time for job shops to be looking for business with this industry.” The low Canadian dollar is working in favour of Canadian companies, and the industry is also benefiting from a continuing strong recovery from the 2008-2009 recession.

The current relative strength of the automotive market has also been a boon, since a large proportion of mould, tool and die customers are automotive companies. Of course having most of your eggs in one basket isn’t always a good thing. When automotive is on top, the industry goes along for the ride, but when it’s down it exerts a serious drag.

“When I look at our own company, we do about 30 to 40 per cent automotive; the rest is diversified across industries,” Azzopardi says. But expanding the customer base is important too. “The average number of customers for a mould maker right now is about six customers. That number should be more like 15 or 20.”

While it may be a good time to look for business from mould, tool and die makers, landing that work isn’t a slam dunk. The sector has unique challenges and demands.

“If you’re trying to procure business from us, you’re going to be coming into an industry that’s very mature, very sophisticated already,” Azzopardi says. “Most of our members have grown or become stable by being efficient. We’re constantly trying to find ways to eliminate waste, which means we’re invested heavily in technology, we’re constantly updating our own machines and our own software and updating our own capabilities.”

The industry is highly fragmented, composed largely of small to mid-sized businesses that don’t always collect data consistently, so industry-wide data is hard to come by. But Azzopardi is working to remedy this deficiency. One of the statistics he provided to Shop Metalworking Technology bears out just how efficient the industry has made itself in recent years. In 2015, he says, the industry generated $2 billion in GDP, a historical high. It attained this benchmark with just 65 per cent of the employees it had at its previous peak.

“How are we doing that? We do a lot of outsourcing,” Azzopardi says. “We’ve improved efficiency 400 per cent since 1986. So we have to be innovative–and we’re looking for suppliers that can fit into that model.”

Those suppliers will have to run their own operations well, Azzopardi says. “You have to be as good as we are–if not better–at what you do. You have to bring technology and innovation to the table. If you have that and you have the elements that make a successful business, then you probably stand a good chance of getting business from us.”

Tim Galbraith, sales manager for midsized plastic injection mouldmaker Cavalier Tool and Manufacturing (he also serves on the CAMM Board of Directors), echoes the emphasis on technology. “We’re about being exact in our cutting, and to that end we’ve embraced technology, five axis machining, high speeds, removing metal fast. Our mantra is speed to market, and we expect that from our supplier base. Those who don’t embrace technology, who are using old equipment that is sloppy and not accurate, will not be our suppliers.”

The job shop ethos is central to the industry. “A tool shop is a job shop,” Galbraith says. “We never make two of the same thing. Every single mould we build is designed, it’s unique.” In the same way, supplier relationships aren’t run-of-the-mill. Work isn’t just handed out; rather, mould makers develop their supply relationships carefully, to a high-capacity formula.

“We work with our supply base around a 110 per cent capacity business model,” Galbraith says. When business cycles are peaking, companies like Cavalier can outsource surplus demand that they can’t meet themselves, and then bring that capacity back inside when things cool down. This requires flexible supplier relationships. 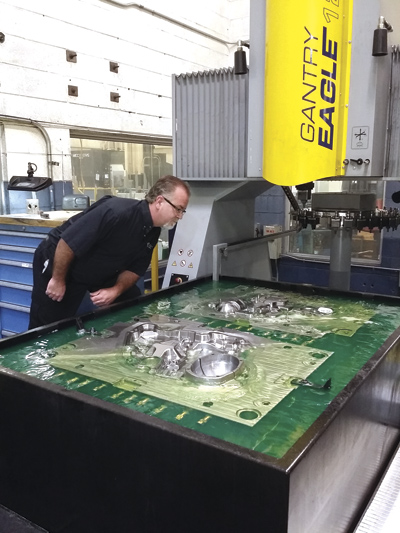 Companies in the industry keep a ‘buffer’ portion of business outsourced, which allows them to maintain high capacity. When there’s a downturn, that work can be brought back in-house. Either way the supplier relationship remains close.

“We have partnerships with people out there who are willing to take our work, who like working with us because we pay well and are fair in our pricing structure,” Galbraith says. “We work closely with them, to the point that we’ll actually help them with programming and things like that.”

Azzopardi says there’s a total of around 170 shops in the Toronto-Windsor corridor, which is where about 80 per cent of the industry in Canada is based. The firms average 50 employees. Azzopardi reached the $2 billion GDP figure by multiplying the industry’s approximately 11,000 employees nationally by the industry average of $200,000 in sales per employee.

Because the industry is technologically sophisticated, it is rapidly affected by new trends in computing. “Simulation is huge right now,” Azzopardi says. “It’s being downloaded to us. So we have to figure out how to get better at it.”

Cutting technology and techniques are also improving constantly. “You have machines now that are cutting faster than they ever have, drilling faster than they ever have, able to cut different materials, exotic materials. I just bought a plate machine because I couldn’t keep up with what was being done outside. I was outsourcing it because people on the other side were programming it and drilling it faster. I have to believe that situation isn’t unique.”

Bringing a function in-house isn’t always so easy, and that’s where supplier opportunities open up. “I’ll tell you right now, CNC lathes are hard to find, and it’s because of the operator dimension,” Azzopardi says. “I’m not going to go buy one, because I can’t get an operator. If you have a supplier that’s really good at that, they’d have all kinds of business.”

An industry association like CAMM is always a good place to start for anyone trying to break into the business. As it happens, CAMM’s membership is now supplier-heavy. “In the last few years we had more mould makers than suppliers,” Azzopardi says, “but now we’re at 60 suppliers and 43 mould makers.” Industry suppliers are finding value in networking and having a presence at trade events, such as the upcoming Mould Expo in Windsor (Oct. 19).

“It’s a great opportunity to plug into the industry,” Azzopardi says. “So much of it is personal. It’s not what you know as much as who you know. That’s what’ll get you from point A to point B, much quicker than if you try to do it on your own.” SMT