By most accounts, FABTECH Canada 2012, Canada’s newest trade show for the metal fabricating industry, was a big success.

The three-day event held at the Toronto Congress Centre drew more than 5000 registered attendees to see the latest fabricating technologies and services from 225-plus exhibitors.

Admittedly, there was some skepticism in the industry when the show was first announced, in part because it was being held just five months after FABTECH 2011 in Chicago, the largest fabrication show in North America. That show hit record numbers for attendance 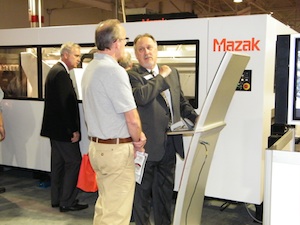 Despite the early skepticism though, exhibitors committed to the event and many that Shop Metalworking Technology spoke with said there were so pleased with leads from the first day, they committed to FABTECH Canada 2014. Among them Mark Lobit, marketing manager for Mazak Optonics who said he was impressed with the quality of attendees that stopped by the company’s booth during the first day of the show. Others who were pleased with the turnout included Stefan Schreiber, managing director of TRUMPF Canada, and Bob Watson, president of Fabricating Machinery Solutions (FMS). 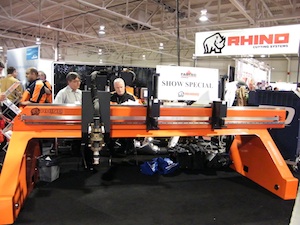 For this editor, one of the pleasant surprises was the size of booths among some of the exhibitors, such as Amada, TRUMPF and Ferric Machinery. The number of exhibitors and the size of some of the booths is perhaps one sign of the confidence that industry suppliers are starting to feel about the recovering economy. 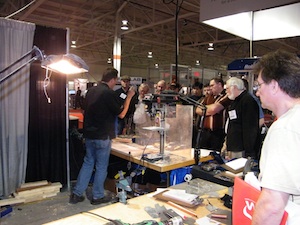 In today’s economy it’s not often that you hear of a new equipment builder, particularly one that is manufacturing its product in Canada. But that is the case with Rhino Cutting Systems, a new manufacturer of plasma cutting machines being manufactured in the company’s Stoney Creek, ON, plant. Paul Bhogal, managing director, says the company’s machines were developed by former Westinghouse engineers who now work with Rhino. Look out for our upcoming story on Rhino on this web site, or on links to the web site on our social media sites, including LinkedIn, Twitter and Facebook.

The positive signs were not exclusive to exhibitors. Many of the attendees that stopped by Shop Metalworking Technology’s booth were actively looking to purchase new equipment. It’s a stark contract to comments made by other attendees at other industry trade shows in 2010 who, at the time, said they were just looking at machinery for future purchases.