When you run a manufacturing business that specializes in one-of-a-kind lighting fixtures, you need equipment that can keep up with the unique production demands it brings with it.

So when Yellow Goat Design in Cambridge, ON, needed to achieve a mirror polish on 1/2 mm thick aluminum and to achieve a high polished edge on acrylic, it began a search for metal fabricating equipment that could meet its needs. After considering its options, it purchased a Mazak Optonics 2.5 kW CO2 laser cutting machine, the OptiPlex Nexus from Ontario distributor Westway Machinery, Mississauga, ON.

Creative roots
You would expect there to be a story behind the name of the company, Yellow Goat Design–and there is one. Nick Lesko, president, who runs the business with brother-in-law Mike Collins, says his father Jerzy was the inspiration for the name.

“My father gave my mother Sandra paints for crafts and when she didn’t do anything with them, he used them and discovered he could paint. The yellow goat was in one of his paintings. When he took his paintings to be framed, back home in Australia, they offered him an exhibition on the spot and from there he went around the world exhibiting his paintings.”

Lesko says his father always had a creative bent and an entrepreneurial spirit so when he needed a light for his house, he created one and eventually turned the activity into a business. 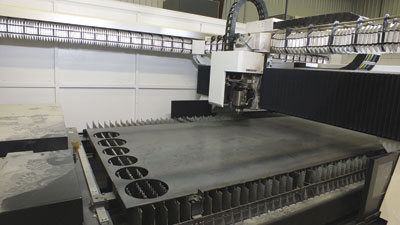 “We started to sell table lights, floor lamps and other light fixtures through retailers in Australia but the market changed with a lot of inexpensive Chinese imports coming into the market and we couldn’t compete on price so we switched gears and went into custom light fixtures.”

For a while the business was going well and Yellow Goat Design was selling customized products extensively in North America, but the cost of shipping product from Australia to the US and Canada became a challenge. That’s when Lesko decided to open a Canadian operation to serve customers in the region more cost effectively. That was 2012, the year Lesko’s brother-in-law Mike Collins joined the company as partner and operations manager, tasked with setting up the fabrication shop in Canada.

“Our launching point was to simply replicate what we had in Australia, so we started with a router and some welding equipment and as we got busier, we increased our arsenal of equipment and purchased two more routers and a small 400 W laser cutting machine from Multicam,” explains Collins.

The first customized lighting fixtures were primarily acrylics and some aluminum but soon the company was working with more metal and designs that entailed more laser cutting. Initially, Lesko and Collins outsourced the laser cutting work, but grew increasingly frustrated with poor lead times and poor quality of cut parts.

“Sometimes we’d have to wait two weeks just to get a metal prototype for a customer and when the prototype arrived it would in poor condition so we decided to purchase a higher powered laser cutting machine so we could do the work in-house and control the quality,” explains Collins. 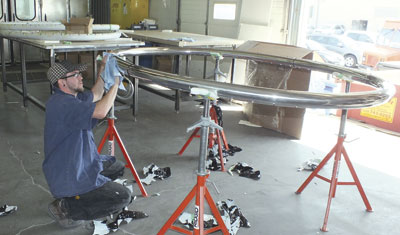 Why laser
When Yellow Goat Design considered its options, it ruled out waterjet and plasma and zeroed in on CO2 laser cutting because Lesko says he and Collins thought they would get the best cut quality for acrylic and metal using laser cutting technology.

“Initially, we looked at laser because of the polished edge we needed to achieve with our acrylic. If you cut acrylic on a router, you need to sand it and flame polish it. The laser cuts acrylic and it looks like it’s already flame polished,” explains Collins.

Once it decided on laser cutting, it considered the options and selected Mazak Optonics for two reasons: price and service.

“We know there are about three top laser cutting machine manufacturers, but when we looked at the market we saw that Mazak Optonics was doing well here. The company has a good product, the price is competitive and they provide good service,” explains Lesko. 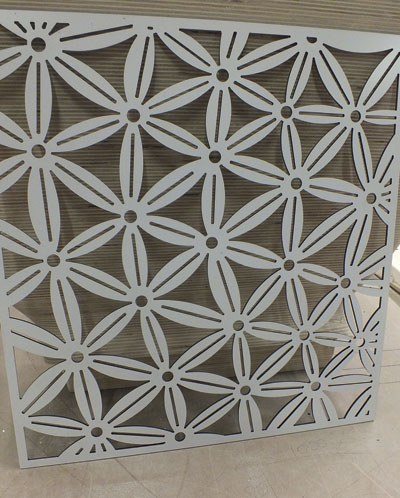 Lesko and Collins went to Mazak Optonics’ Technology Center in Chicago to see the OptiPlex Nexus in action.

“We took pieces we’d be cutting on the machine with us and the big deciding factor was the fact that the machine easily cut a 1/2 mm thick mirror polish aluminum and others struggled with this,” explains Collins. “It’s a difficult material to cut because it has a reflective mirror finish on one side, but the Mazak machine did it with ease.”

“We had a small problem with a damaged airline which damaged the cutting head and free of charge, the company sent a technical support person to help us and ensure everything was running well.”

Bringing laser cutting in-house means Yellow Goat Design now has control over its quality, but equally important is the speed at which the company can now produce those quality products.

Today, 90 per cent of Yellow Goat Design’s customers are based in the US. Its customers range from casinos and hotels to commercial buildings and shopping malls. To accommodate growing demand south of the border, the company set up an office in Philadelphia staffed by four sales people.

Jerzy Lesko is still involved in the business and is one of six designers based in Australia that create the innovative lighting fixtures, many of them illustrated in a catalogue that company has created.

“We do everything,” explains Lesko. “We prefer to do our own design. We use our catalogue of designs as a conversation point with customers to create the kind of products they think will fit their needs.” SMT