Grooving to a different beat After a visit to Horn’s global headquarters in Tubingen, Germany, one thing becomes clear; this is not a cutting tool company that goes with the flow. Indeed, it goes against the stream, says Andreas Vollmer, sales and marketing director for Horn, and a member of the company’s Board of Directors.

“We don’t want to swim with the mainstream. We always look at what we can achieve if we go against the stream.”

As many manufacturers began to invest in low cost countries like China in the 1990s, Horn entered the North American market in 1998, doubled manufacturing operations at its German headquarters in 1999 and then doubled the space again in 2008. Next year Horn will open its $77 million two storey, 15,000 sq m facility that will house toolholder production, a coatings department and logistics. It also plans to open a facility in Mexico to serve the growing automotive market. 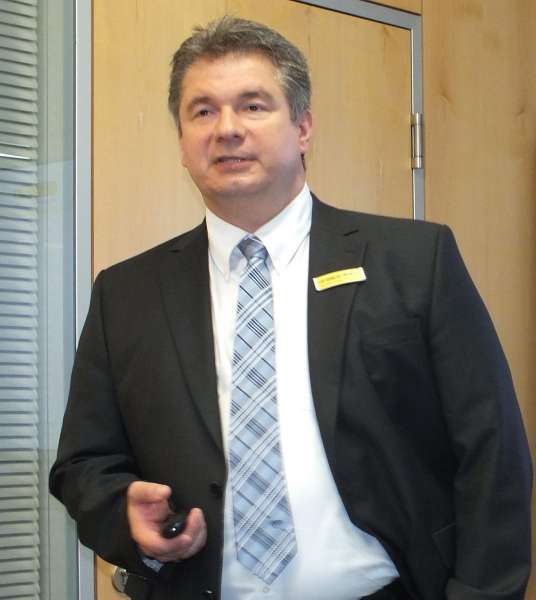 Horn Technology Days 2015 marked the fifth time the company has held the event. Vollmer says the event was a response to the declining economy back in 2008.

“We wanted to show customers that we were still active and thought we have to do something and this is the reason we developed the Technology Days. We went against the stream. At that time, with less work because of the slowdown, we couldn’t take long to deliver products and we implemented a manufacturing process called Greenline to shorten delivery times so we could react quickly to customer needs. Today, we can dispatch tools within three to five days to a customer up to acertain quantity of inserts and toolholders.”

Horn’s investment in manufacturing automation and in apprenticeship training is a way to lead by example as to what manufacturers must do to remain competitive and ensure a skilled workforce, says Vollmer. “We have to compete with the best countries and we need to show customers that what we tell them is what we do too. By investing in North America and in Germany we prove we can maintain employment; we don’t have to go anywhere else; we need to be competitive where we are.”

Horn has invested in automation in its North American and its German operations. In fact, in its carbide blank manufacturing operation alone, it runs approximately 200 DMG MORI automated DMU models, which have been specially modified to solely grind carbide blanks. And the company continues to automate its toolholding and carbide insert production operations. Today, there is one person for every seven machines. Vollmer says Horn is equally committed to employee training and apprenticeships. The Horn Academy offers training for employees and customers, and each year, Horn takes in 15 apprentices and each one receives a job offer after completing a three-year apprenticeship program.

While new technologies and products were introduced during Horn Technology Days, the primary focus was to educate and inform attendees about how to improve productivity through cutting tool processes. Eight presentations, complemented by demonstrations in Horn’s Technology Centre, covered a range of topics, from grooving and parting off techniques for stainless steel, longitudinal turning for complex parts and slot milling, to trochoidal hard milling, tangential milling effectiveness as an alternative to radial milling, and when to use special tools (e.g. form tools, Bell cutter and combination tools).

Horn’s commitment to technology education is also evident in how it treats it employees and its investments in apprenticeship training.

“Employees are our most important investment,” says Vollmer. “If you don’t take care of your employees and offer them a chance to advance, you will have good performance. It’s always been our intention to give people the latest technology to work with. And last year, Lothar [Horn’s CEO] made a major investment in an apprenticeship program.” Horn’s continual investment in its manufacturing operations is a result of growing customer demand and a need to accommodate a growing list of products. Since 2010, the company’s product range has grown by 50 per cent. It has expanded its core product range with high feed milling cutters, tangential milling cutters and modular grooving tools.

Horn sets itself apart from competitors by focusing on key technologies but it is also recognized for offering what Vollmer says are customized tooling solutions.

“50 per cent of our business is generated from customized tooling. Since starting in 1969, we’ve done more than 120,000 individual customized solutions for our customers.” Given this fact, it’s not surprising that R&D is customer-driven. Vollmer estimates Horn invests 6 to 7 per cent of its annual revenues back into the company for R&D initiatives.

Since entering the North American market in 1998 with a production facility for grinding in Franklin, TN, Horn has continued to invest in the market. The expansion into Mexico in 2016 marks the first step in Horn’s intensified efforts in the region, says Vollmer.

“Yesterday it was said that you have to clean in front of your door before you take the next step. For us, the front door was the US market. After IMTS in 2014, we went direct in Canada employing our own people and it was the first step in getting close to the Canadian market customers. Mexico is the first project in which we’ll intensify our efforts in North America. Once it is running successfully, we can look in parallel at the Canadian market.”

The oil and gas market in Canada is one area where Vollmer sees an opportunity for growth.

“It is not known by many but we have been in the oil and gas field for about six or seven years now and we think we can offer customers in this area a new perspective with our tooling solutions with bigger tools for heavier machining.”