In 2014, Mazak Corp. will celebrate a milestone: 40 years of manufacturing in North America. The machine tool builder kick-started the celebration early with its “Discover 2013: A Discover More with Mazak” event, which ran October 8 to 16 at the company’s North American headquarters in Florence, KY. Close to 3,000 customers attended the event including more than 130 Canadian manufacturers from across the country.

Ashley Schille, a lead hand machinist, and Collin Ginther, a CNC programmer, both with Hitachi Power Systems Canada in Saskatoon, SK, were among the Canadian manufacturers. Hitachi operates two machine shops in Saskatoon, each equipped with a variety of Mazak multi-tasking machines including two e-Integrex 420s, e-Integrex 670 and i-200 machines.

“We’re looking at some new machines, but we came to the event more because of the educational presentations, says Ginther. “Some of the presentations sound interesting and can maybe help us to improve what we’re doing,” says Ginther.

“This is not a show and it is not an open house; it is a technology and education event. Our objective is to continually raise the bar on this event and create a meaningful manufacturing platform,” says Brian Papke, president of Mazak Corp.

“I just returned from EMO in Europe and we believe the 22 new machines on display make Mazak a leading innovator in the industry.”

When Mazak’s recent expansion is complete early in 2014, the 800,000 sq ft facility will have the capability of producing 200 machines a month. The plant manufactures 114 different models of CNC lathes and machining centres from nine different product lines.

Ben Shawe, vice president of manufacturing, says Mazak’s Production on Demand concept makes it possible for the company to produce this variety and this number of different machine tools. 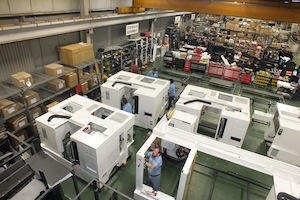 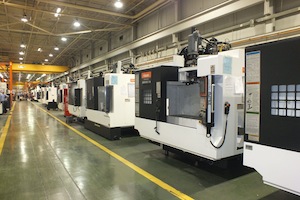 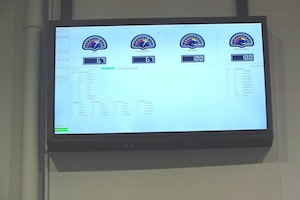 Mazak’s MT Connect dashboard that will be equipped on all of its machines in the Florence, KY, factory.

As part of its commitment to increasing and improving its manufacturing operations in North America, Mazak is in the midst of installing a factory-wide machine monitoring software system from Memex Automation, Burlington, ON, through MT Connect, an open manufacturing standard that allows communication between different controls, devices and software applications.

“We’re developing dashboards to monitor variables that affect our overall equipment effectiveness (OEE) so we can take action to improve on processes. The final layout of the factory will consist of more optimized part flow through the facility, expanded machining and fabrication capabilities and increased production output per month to 200 units at our current product mix,” says Shawe.

“One thing is constant; customers want increased productivity and the designs of our own products include new innovative ideas,” says Papke. “Parts [in manufacturing] are more complex but assemblies have fewer parts and this requires more multi-tasking and five axis capabilities to match machines to applications.”

Manufacturers had the opportunity to see several new machines in action, many equipped with automation. The machines ranged from the smallest vertical machining centre, the Vertical Center Universal (VCU) 300 equipped with a three-axis table to the large Quick Turn Nexus (QTN) 550 MY equipped with a 4 m (160 in.) bed length and 14.75 bore sizes that is geared for the energy and oil sectors. 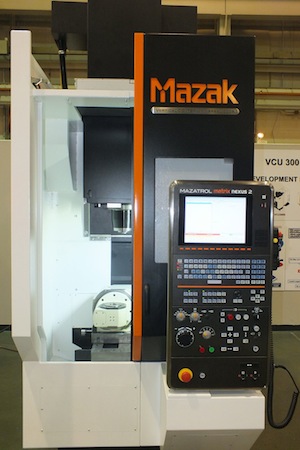 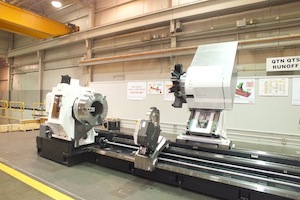 Productivity improvements often involve automation and many of the introductions at Mazak’s event showcased automation, including two new multi-tasking machines, the Integrex i300s and the Integrex i400st, and a turning centre, the Quick Turn Zenith 250MY, all equipped with Fanuc robots. The GR100 gantry loader is another example of Mazak’s focus on automation. The new machine introduced by the company’s automated systems group, will become a standard option for the company’s Kentucky-produced turning machines, including the QTN, QTS200/250 and the 500U machines. 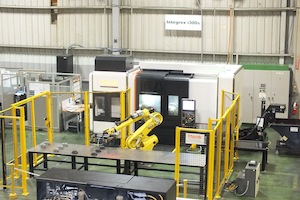 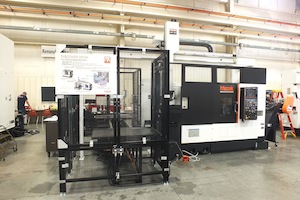 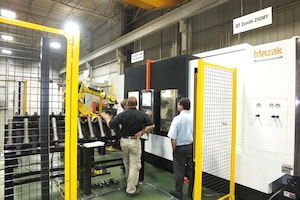