It is quite unnerving to walk into a fabrication shop and see welders bent over their work with their helmeted heads surrounded by welding fumes because the fumes pose a risk to welders’ lungs.

“Welding fumes are a complex mixture of fine condensed metallic particulate and other solid particles. While welding fume is not a gas, some gases such as ozone, NOx and carbon monoxide are also generated during the welding process,” says Keith Daley, environmental systems manager at The Lincoln Electric Company of Canada. “This is important to realize when you are trying to remove welding fume from the breathing zone of the welder.”

If shops have an adequate supply of make-up air in the work space, you can ensure gases don’t exceed safe levels. “However, with welding fumes, you need adequate air velocity to effectively remove it. It won’t completely diffuse on its own.”

Each particle is tiny, often between 0.2 and 1.0 micron in size but are visible because of the large number of particles.

“When you are welding you are vapourizing some of the weld metal. Most of the fume comes from the consumable, and as metal melts, some will evaporate. It can’t stay vapour very long so it will condense into a particulate. The smoke you see rising up is tiny particles–very small and very hot. It rises about three feet per second,” explains Daly. Since fume primarily comes from the electrode, it consists of complexed oxides of its metals, alloys and flux compounds. In steel, welding fume is primarily iron oxide and oxides of compounds such as manganese and other metals.

Purchasing a fume extraction system is usually the first solution that comes to mind when approaching the question of welding fumes. While this is a practical and often necessary solution, to reduce welding fumes effectively, you need to take a systematic approach. “There are many ways to reduce exposure to welding fume,” explains Daley. “The first thing you do is look at your weld design and then you look at your process.” 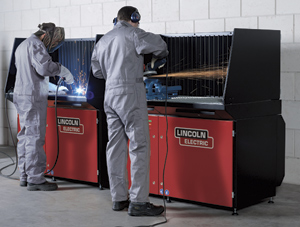 1. Positioning
Don’t place your head above the weld so you’re not breathing the fumes directly. “Despite warnings and instructions, some people, when they are welding, just stick their face in it. They like to get in  close,” says Daley. “What you need to do is position yourself so that the weld fume is out of your breathing zone.” This is the easiest way to avoid directly inhaling weld fumes. Unfortunately, this is a common sight in some shops and especially with inexperienced welders. Better helmets with bigger viewing areas allow welders to see the object being welded more clearly, so they don’t have to crouch over the workpiece.

2. Reducing fume generation by design
“A bigger weld uses more weld metal, so you get more fume generated,” says Daley. A properly sized weld will result in the lowest amount of welding fume for a given process and set of procedures.

“It is not necessarily a shorter weld. If you put in a quarter-inch weld instead of a three-eight inch weld, you are only using half the amount of wire, and the amount of fume that you create is directly related to the amount of consumable you are using.”

3. Reducing fume generation by process
Some welding processes generate more fumes than others. “Self-shield flux core generates more fume than stick (SMAW). It is a little less elegant of a process,” says Daly, adding that you typically have more heat energy going into it. Some of the fume comes from the flux. And stick creates more fume than MIG and metal core, which are about the same. TIG and sub-arc result in very minimal levels of fume near the welder’s breathing zone. “Typically a stick weld results in about two per cent welding fume by weight, whereas MIG  produces about one per cent, and something like TIG will be under a quarter of a per cent. If you do the same weld, instead of using a pound of weld, you use half a pound you get that much less fume,” explains Daley. “You select the process to make a good weld. If you can get the same quality with a less smoky process than you choose the less smoky process,” he says.

Gas Tungsten Arc Welding (GTAW) or TIG welding, produces the least amount of fume, since the filler metal does not carry the welding current, and the arc is very stable. However, this process requires skilled operators, has a low deposition rate and while a good choice for precision welding, it’s not very practical in a mass production environment.

4. Reducing fume generation by filler
Since the filler metal carries the arc and is the first to melt, in Flux-Cored, MIG and SWAM welding, the number of hazardous elements in this wire is critical to reducing weld fumes. One of the things that is topical is manganese – allowable levels of manganese have been greatly reduced. Most of the manganese comes from the welding consumables. “We are putting less manganese in the filler, but the reason it is in there is that it gives the weld certain desirable properties such as toughness and resistance to cracking– and there are chemical reasons to have it there as well,” says Daley. Most, if not all, manufacturers are continuously working to reduce the level of hazardous elements in their wires while at the same time maintaining, or enhancing, the performance and capabilities of the filler material needed for industrial welding applications. 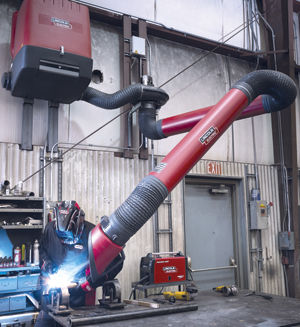 5. Reducing fume generation by shielding gas
Shielding gas is crucial to most welding applications and affects fume generation. “The energy levels required to dissociate and ionize the various gases relates to the excess energy available to boil metal from the electrode and molten droplet. In practice, using 100 per cent CO2 will require a procedure increase of 1-2 volts compared to Argon blends.

“Using a pure C02 gas will create more fumes than an argon blend because of the added energy in the arc vaporizes more metal and creates more fume,” he says.

Controlling the waveform on modern welding power sources is another way fumes can be minimized. “If you go to a waveform with a pulse, this can reduce the amount of fume by reducing spatter and lowering the total heat input and you are not vaporizing as much metal,” notes Daley. “It is a more controlled weld and a more efficient weld.”

7. Removing coatings in weld area
Before welding, the weld area must be cleaned and this is important not just to ensure a proper weld, but also because coated material will introduce other hazards to the weld fume. Coatings can include metalworking fluids, oils and rust inhibitors, solvents, lead oxide primer, cadmium plating, plastic coatings and galvanized steel, which contains zinc that produces zinc oxide fumes.

“If you are working on something that has paint, oil or other coatings on it, then you may get smoke within the fume plume that contains potential toxins. A cleaner piece of metal will give a better weld and less fume.”

Depending on the coating, it should be removed with some sort of stripping compound as grinding it can potentially introduce toxic dust into the environment.

8. Fume control – Personal
In most welding shops, it is not necessary to wear a respirator on the floor or while welding. However, in some welding situations, like welding inside confined spaces, a personal respirator might be necessary. These can come in various styles depending on application. The most basic is a disposable respirator that can be picked up at most any hardware store. Most helmet manufacturers have dedicated filtered respirators that meet stringent NIOSH and OHSA criteria for personal protection. Extreme welding situations will call for powered air systems that will pump clean air to the welder under their helmet. “Applying appropriate engineering controls to ensure adequate ventilation should be the first step. Personal protective equipment should be the last thing you do. Not the first just because it is easy,” advises Daley.

9. Fume control – at source
Capturing the fumes at the source is perhaps the best method of fume control. “If you can keep the welding in an area that you control, it makes it easier. If you can take the welding and put it in an area that is separate, than you do not have to worry about affecting other workers,” suggests Daly, adding that there are many methods of localized fume extractions including vacuum hosing mounted directly on the welding gun, as well as portable and stationary systems, which will have hoses, 6 to 9 in. (160 – 200 mm) in diameter that are flexible and can be positioned where needed.

A healthy shop is a well-ventilated shop where anybody can walk through without getting exposed to hazardous substances. “If you localize the welding area and have proper fume control there, with the hoods, and then have a proper system that filters the air back in, that will benefit the whole shop,” advises Daly. SMT