Tips to give your turning tools the long life they deserve

Fifteen, maybe twenty minutes. That’s what anyone should expect a turning tool to last. It doesn’t seem terribly long, but this is the point at which the balance between productivity and tooling cost has been reached. Cut back on your feeds and speeds to make the tool last longer and you’ll produce fewer parts per hour. Push too hard and you’ll lose any throughput gains to more frequent tool changes, greater costs on disposable tooling, and the potential for scrapped parts.

That’s according to Kevin Burton, turning specialist for Sandvik Coromant Canada Inc., but most cutting tool experts will tell you much the same thing. They’ll also tell you that, in order to reach this fleeting benchmark, you should always start with the manufacturer’s recommended cutting parameters, which in most cases are higher than one might expect.

Checking boxes
But let’s assume for a moment that you can’t get there. You’ve done all the usual stuff. The workpiece is firmly gripped and well supported. You’ve eliminated chatter-inducing vibration. There are no problems
with chip control, your cutting fluid is both well-maintained and has the proper concentration, and you’ve played with the feeds, speeds, and depths of cut until you’re blue in the face. What then?

Burton and others suggest that job one is to determine the tool’s cause of failure, and that means not waiting until the drill or insert is destroyed before inspecting it. “Troubleshooting requires that you check the tool every few parts until you understand the wear pattern,” says Burton. “If you wait for catastrophic failure, you’ll never really know what’s happened.”

Wear it well
These wear patterns are well documented, as are the steps needed when experiencing them. Built-up edge, for example, is typically remedied by increasing the cutting speed. Crater wear is just the opposite, requiring a slight decrease in cutting speed. Microchipping and frittering calls for lower feedrates, while plastic deformation might require lower feeds and speeds. Of course, a different coating, carbide grade, or insert geometry could cure each of these problems with no change to the cutting parameters whatsoever. It’s complicated.

“The primary cause of tool failure in turning operations is excess heat, which is most likely caused by improper cutting speeds,” says Burton. “After this comes feedrate and then depth of cut. That’s why I generally recommend increasing the latter as much as possible, as this reduces the time in cut, but not until the feeds and especially the surface speeds have been dialed in.” 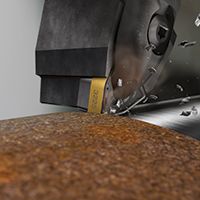 The goal is twofold—always aim for flank wear, as this is the most predictable of all failure patterns. And as already explained, machinists should not expect a tool to spend more than 15 to 20 minutes in the cut, as this provides the greatest throughput and lowest cost.

Burton offers other tips, including a slight feedrate reduction as the tool approaches centerline on facing and parting operations. Always use the largest nose radius available, barring chatter from the increased tool pressure. Use wiper inserts such as Sandvik Coromant’s WMX or WF geometries to improve surface finishes when using high feedrates. And increase the lead angle to make thinner chips and reduce notching at the depth-of-cut line, preferably with the company’s Prime Turning style of cutting tool.

Getting thin
Robert Keilmann, global product manager for turning at Kennametal Inc., agrees with most of that. But chip thinning, he notes, does not require a proprietary tooling system. “People have been doing the same thing for years by back-turning with a 35-degree or 55-degree diamond and left-hand toolholder. That said, it’s somewhat of a niche process due to the increased tool pressure, and the fact that you’re turning away from the chuck. Not all parts will support it.”

For shops turning nickel and iron-based high-temp alloys, Keilmann has an additional recommendation: Kennametal’s KCS10B, a PVD-coated grade said to eliminate the cratering and depth-of-cut notching common in these materials. “Initially, we targeted heat resistant superalloys, but have since found that the grade also performs quite well in some 300-series stainless steels.”

Back to class
High-performance grades and turning techniques aside, Keilmann points to the need for continuing education of programmers, and machine operators. Many shops still lack the troubleshooting skills needed to identify failure modes, he adds, and have a knowledge gap regarding the proper application of cutting tools. “Our application specialists might come in to help analyze a tool life problem and find that the customer is running crazy-high cutting speeds or underfeeding the tool. Clearly, more needs to be done in this area, and it’s often the larger shops that struggle the most in this regard.”

The good news is that Kennametal is seeing increased traffic to its website and other online resources. Says Keilmann, “Customers are leveraging digital media and do quite a bit of research on their own to gain a better understanding of cutting tool usage. This sort of self-training eliminates much of the tool misapplication we’ve seen in the past, where someone is using a cast iron grade on steel, for instance.”

Most agree that this last situation is a common one. When faced with a troublesome turning application, any machinist’s normal tendency is to back off on the feedrate, when in reality, he or she might be better off going higher—often much higher. Ashok Guruswamy, product manager at Iscar Tools Inc.’s Canadian division, has seen the same problem and notes that at least some of today’s turning inserts support surprisingly aggressive feedrates.

SUMO wrestling
“Our Sumo-Grip (TAGB) tangentially-oriented insert pocket, for example, provides rigid and secure insert clamping in external profile turning and groove-turning applications,” he says. “A very strong insert design enables machining at feed rates of up to 1 mm per rev (0.0393 ipr), and since the tool does not require a top clamp, chip flow is unobstructed.”Guruswamy named several new turning developments at Iscar, among them the double-sided “Mini-P-Turn” for Swiss-style and small CNC lathes, the LogIQ-4-Turn double-sided, positive rake inserts for reduced cutting forces, and an IC804 PVD coated grade for machining hard, high-temperature alloys.

Like his colleagues, Guruswamy recommends using turning tools with a positive lead angle where applicable, as well as high-pressure coolant. “Many of our toolholders are equipped with JHP (Jet High Pressure) coolant nozzles, which direct cutting fluid to the insert edge for increased tool life, improved chip control, and higher productivity.” SMT