For small parts, slitting saws are often a great alternative to end mills

When machining a slot the width of a shot glass, many machinists reach for a roughing end mill. They’re low cost and effective, and most CAM systems offer milling routines that make short work of even the toughest slot or channel. But what happens when that slot is narrower than a pencil? There’s no such thing as hogging at this scale. Poor chip evacuation, cutter breakage, insufficient coolant flow—these are just a few of the challenges with end milling small slots and part features. If part geometry allows, carbide saw blades could be a viable alternative to that old standby, the end mill.

You say tomato
Slotting saws, slitting cutters, whatever you call them, people don’t often think of saws as replacements for end mills. But according to Joe Negron, product manager for California-based Kyocera Precision Tools (KPTI), solid carbide saws are often successful where end mills fail. “In the area of micro-machining, carbide saws make a lot of sense. Take a 0.50 mm end mill (0.020 in.) for example: you’re typically looking at two flutes, and the feedrate will be limited due to the cutter’s small size. Compared that to a 36-tooth saw with an outside diameter of 3/4 in. (16 mm). Not only is it far more rigid, but more teeth means longer life and faster feedrate.”

Another vote in a slitting saw’s favour is cutting speed. Achieving sufficient surface feet per minute (sfm) when using tiny end mills is almost always problematic. In the example above, machining steel with a 0.50 mm end mill at a cutting speed of 200 sfm (60 m/min) requires 40,000 rpm, a tall order for many machine tools. Negron’s 3/4 in. carbide saw, on the other hand, only needs 1000 rpm to achieve the correct speed. 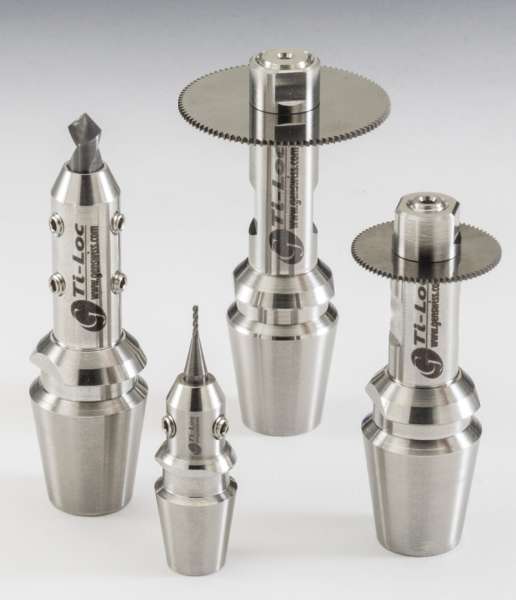 At first glance, they seem expensive. Where a miniature end mill might cost $30, a comparably sized carbide saw can cost twice that. Yet as Negron points out, carbide saws have 10 to 15 times as many teeth for a given diameter, something that’s especially important for long-running jobs and tough materials. “End mills are probably best where you have to machine a couple of parts and you need to tool something up quickly. But if you’re doing a lot of micro-work, you absolutely want to take a look at carbide saws. They’re available in widths down to 0.05 mm (0.002 in.) and increments of 0.012 mm (0.0005 in.), are much more precise than an end mill, and definitely offer better tool life.”

Evacuating by alternating
RobbJack Corp. is another California cutting tool company offering tissue-thin carbide blades. Mike MacArthur, vice president of engineering, says chip evacuation can be a concern with slitting operations. “A typical 2.5 mm saw (0.100 in.) creates a chip exactly 2.5 mm wide. So what ends up happening, particularly on very deep slots, is that the chip rubs on the way out. This creates a lot of torque on the spindle and stress on the cutting tool. It also impedes coolant flow, which in turn is hard on tool life.”

To counter this problem, MacArthur recommends the company’s K-series slitting saws with an alternating tooth design. Rather than having each tooth cut the entire slot width, the tool is ground in a manner similar to that of a staggered tooth bandsaw blade, where each saw tooth carries a proportionately smaller load. This is a bit like two lumberjacks tag-teaming the same pine tree—the narrower chips are able to bounce out of the slot, there’s more room for coolant, and it’s much easier on the spindle. “This solves about 99 per cent of the saw problems we see,” he says.

Hub design is another consideration. The sides of a slotting saw are made to be concave, similar to a pair of super-thin dinner plates glued back to back. Through the centre of the plates runs a hole, around which is the mounting flange. The opposing sides of this flange are ground perfectly parallel to one another. This assures wobble-free arbor mounting and allows for multiple saw blades on a single arbor–picture a slotting operation for a miniature aluminum heat sink, where the parallel grooves are cut all at one time. MacArthur says this design eliminates any issues with runout and slippage, and provides the proper clearance for sawing operations.

Arbor day
Eliminating wobble is only one of the prerequisites for successful sawing. MacArthur says a high quality arbor is critical to minimizing radial runout, a concern for any machining operation. And while he’d be happy to sell you a RobbJack brand arbor, his top concern is that you buy one to H5 or better tolerance, and use a high quality toolholder to grip it. 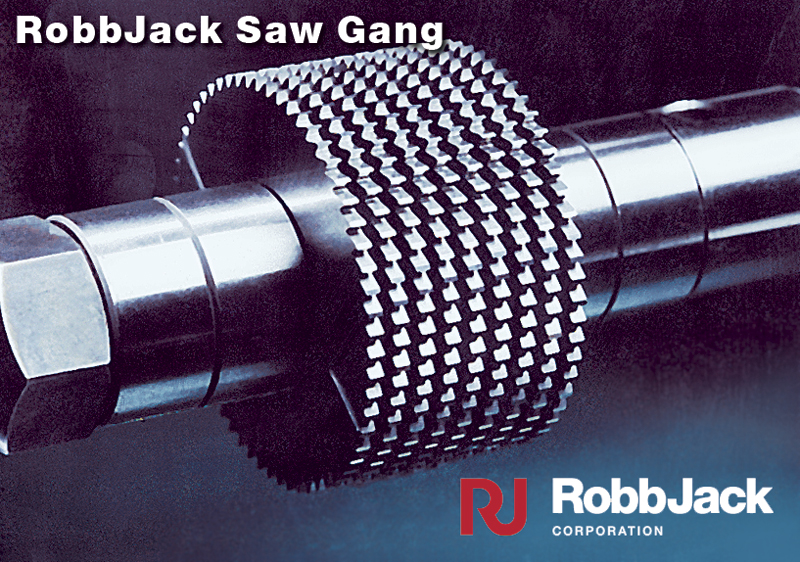 Scott Laprade agrees. The marketing manager at Genevieve Swiss Industries Inc., a tooling and accessory provider for CNC Swiss turning machines in Westfield, MA, Laprade says many common problems can be eliminated with a slitting saw and the right toolholder. “I’ve worked with customers that were having issues with burrs or vibration using an end mill, something that can be
a real problem on stainless steel and titanium parts. We switched them over to a saw blade using one of our Ti-Loc arbors and the problems disappeared. They not only got better accuracy on the part feature, but the tools lasted much longer.”

Many of the applications Laprade encounters are traditional sawing operations such as slots in tubing and other thin wall parts. In these cases, he recommends a blade pitch fine enough to keep a minimum of three teeth in the cut. This eliminates the hammering that occurs with coarser blades, which tend to grab the workpiece and create vibration. And just because it’s a slotting cutter doesn’t mean it’s limited to slotting operations. When used properly, he says, micro-saws can also be used to mill flats, keyways, and other features normally associated with end mills, but at far higher feedrates.

One final benefit that’s worth consideration is this: ask anyone who’s setup a Swiss CNC or mill-turn centre and you’ll often hear complaints of limited live tool stations. Some of this can be alleviated through the use of combination saw arbors, which as Laprade explains, allow a rotary cutting tool such as a drill or reamer to be placed in the same holder as a slitting saw. “In any situation
where you need more live tools than you actually have stations for, doubling up like this is a fantastic way to advance your machine capabilities without having to spend a whole lot of money.”

Higher feeds, less vibration, better tool life. These are just a few of the potential benefits of slitting saws. True, they’ll never replace end mills, but for many applications–especially those with small part features and thin walls–slitting saws might be the cat’s meow. SMT

TECH TIPS: Two ways your quality machine tool will pay for itself

Ask the Expert: The case for carbide