Selecting the best technique for your internal threading operations

Internal threading presents some unique challenges, not the least of which are that it’s a complex process and often requires a trade off when it comes to selecting the right tools and techniques.

Thread forming, for example, is a popular choice with many because thread formers don’t generate chips that lead to tool wear and tool breakage. However, gaps created on the crest of the thread during forming can be problematic as they can get contaminated or create heat stress points. It’s the main reason some industries such as medical implant, food and aerospace parts don’t use thread formers, says Cullen Morrison, business development manager, threading, Komet of America, Schaumburg, IL.

Thread taps are less expensive than thread mills; taps run on average about $100 for high performance ones versus an average $300 to $400 for thread mills. However, thread mills offer longer tool life, more cutting flexiblity (e.g. multiple pitches), and are easier to replace (replace just the tip not the entire tool) than thread taps when they break. 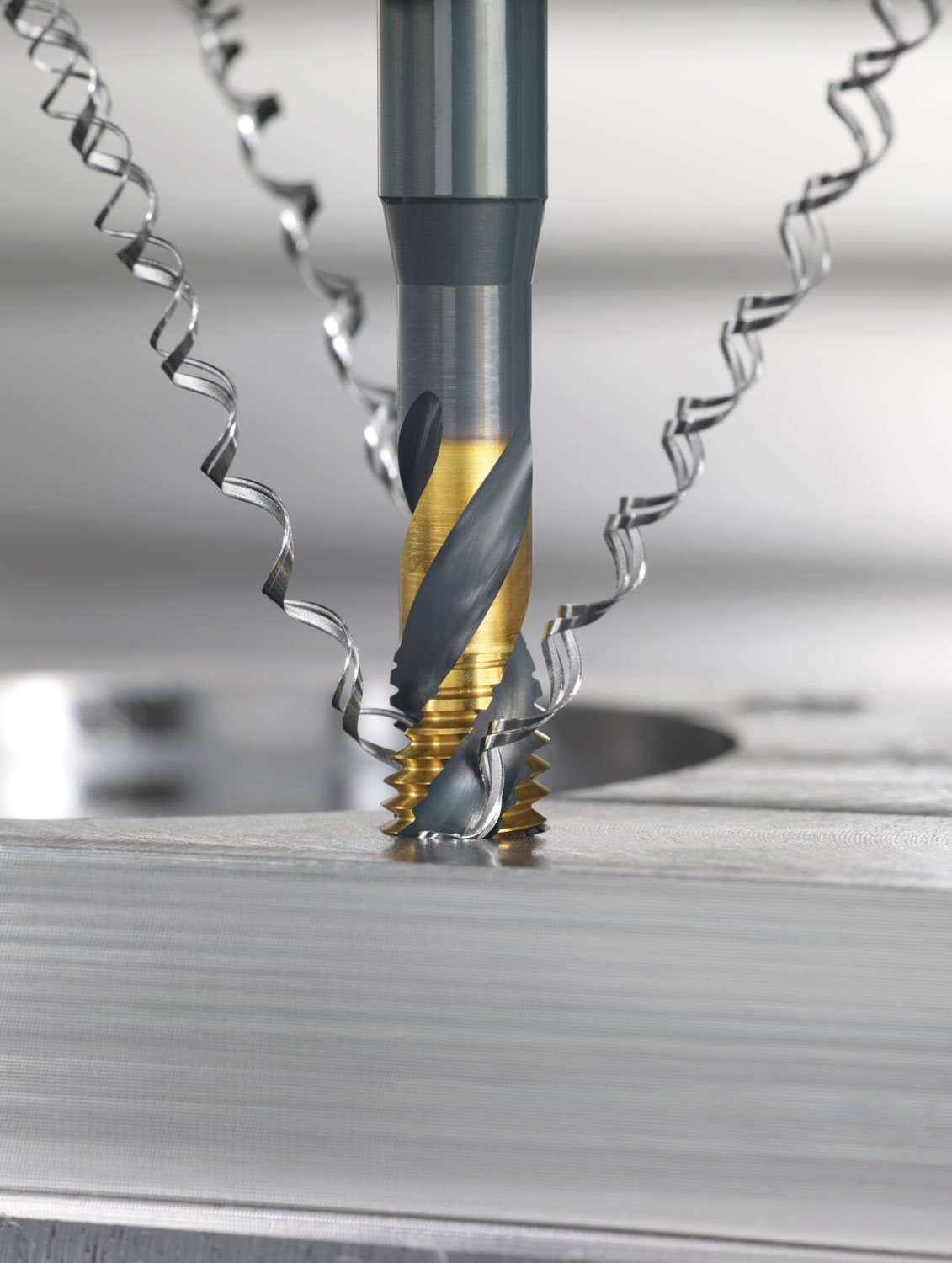 “A major challenge with internal threading is that it’s generally the last operation to be done and there’s a lot of value in the component already. If you have a high value component you don’t want to risk breaking taps so you may look at alternatives such as thread milling,” says Pat Nehls, product manager, Walter USA, Waukesha, WI.

Two other alternatives for internal threads are thread turning and thread grinding. Thread turning typically uses single point or multiple tooth inserts, while thread grinding is a good choice for tight tolerance work, although it requires a dedicated grinding machine and grinding wheel versus cutting tools.

Despite the trade offs, there is a place for all threading methods, say suppliers who spoke with Shop Metalworking Technology. Like any selection you make for your machine shop, you need to assess you internal threading needs to determine the best method.

Suppliers say you need to consider variables such as the type of machine you have (if you have a turning centre or grinding machine your choices are going to be restricted to thread turning or thread grinding), the type of hole (e.g. blind or through-hole), the size of hole you’re threading (thread milling won’t thread as deep a hole as thread tapping), the depth (whether you need threads on only a part of the hole or threads right down to the bottom), the type of material (hardened alloys are more challenging) and, ultimately, the part the threaded hole will be part of.

Controlling chips
The most obvious way to control chips is to select thread forming as your threading method since it doesn’t generate chips. Yet, as discussed, it’s not a process suitable for all applications, so for those that must consider other threading processes, chip control is a major issue. 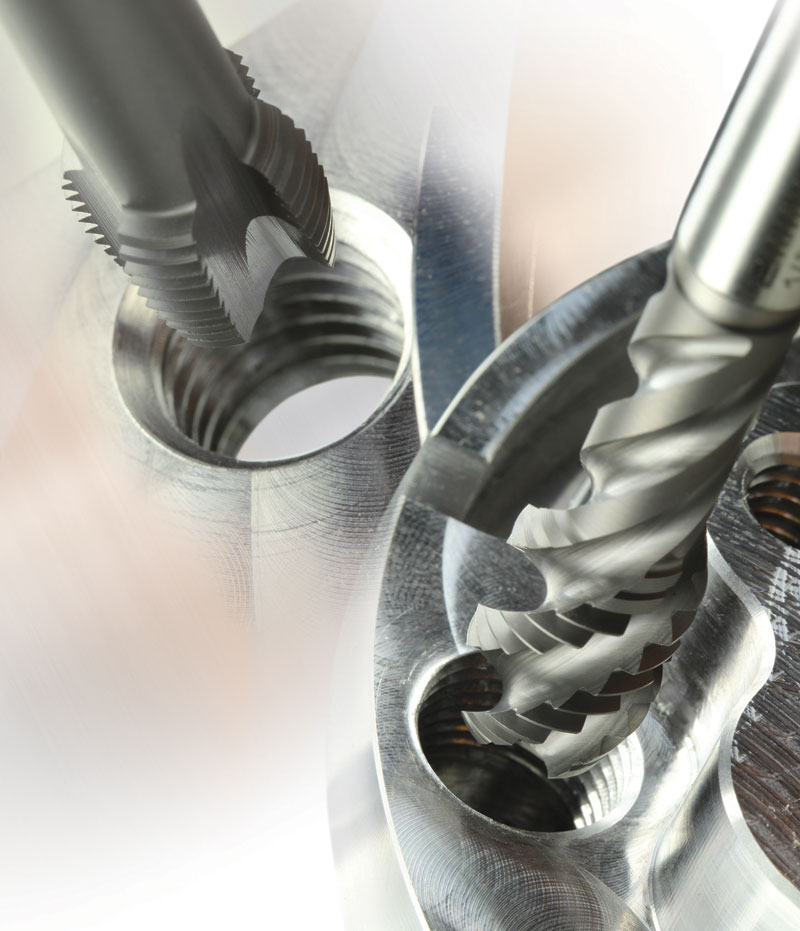 “Of the three designs, spiral fluted taps break most often because they’re the least rigid, but if you require a blind hole you have to use a spiral flute or consider a thread mill,” adds Stephens.

Another issue with spiral fluted taps is bird nesting. Not only can it damage the tap, it’s time consuming, say suppliers, especially for manufacturers who have to tap multiple holes, as they have to periodically remove the bird’s nest to ensure it doesn’t interfere with the threading process.

Some suppliers have changed the design of their thread taps to eliminate or reduce bird’s nesting. OSG, for instance, has introduced a thread tap with a variable helix design in which the degree of the helix declines as the tap makes its way into the hole. The design changes chip formation and evacuates chips away from the tap.

“One of the things we do is to change the number of flutes and angles on the flutes because it can change the chip form,” says Walter’s Nehls. “As well, taps always have a lead so we look at how many threads are producing the lead. For example, if a customer wants full threads as close to the bottom of the hole as possible, you need a shorter lead on the tap, but that in turn leads to heavier chips which are more difficult to break, so we need to look at a specialized solution. If a customer can drill a hole deeper with threads not so deep, he can use a tap with a longer lead and divide the chips up over more pitches in front of the tool to generate thinner chips and to get better tool life.”

Tool wear and breakage
The metal substrate you need to thread is a key consideration because different alloys have varying degrees of hardness.

“Super alloys are a big problem. Threading is a difficult operation and throw in difficult-to-machine materials and you have huge challenges,” says Morrison.

That’s because super alloys have a tendency to want to spring back during the threading process, which puts a high load pressure on threading tools and can result in tool breakage.

“Tapping titanium alloys such as Titanium 6AL4V is more difficult than tapping most alloyed materials, but certainly doable with the appropriate taps and techniques. Stainless steels such as 304, 316, etc. can also present challenges due to their high ductility, low yield stress and relatively high ultimate tensile strength. Nickel alloys exhibit high hardness and extreme elastic memory and are also difficult to thread.”

Hatch says manufacturers should look for “taps and thread mills with innovative geometric designs and coatings that promote maximum machinability and chip evacuation, and the use of modern tap holders and related equipment combined with a positive speed and feed control of the machine.”

He cites Emuge’s Z-Taps as an example. The new taps feature a Z geometry with special relief and rake angles for tough long chipping materials, increased number of flutes with a 45° helix angle, and a multi-layered coating (GLT-1) the company says provides controllable chip formation.

Coatings on threading tools can extend tool life by protecting them from the heat and wear they typically encounter in a threading application.

“Customers like coated tools because you get better tool life,” says Nehls. “But different coatings change the lubricity along the cutting edge. For instance, with TiN (titanium nitride) you have more lubricity on the cutting edge forming the chip, which means the chip curls less tightly and that can lead to chip control problems.”

Nehls adds that modifying tools (e.g. regrind) to remove the TiN layer, can help as “you get better chip control, but the downside is that with no coating, you also have lower tool life.”

Coatings on tools are one way to combat tool wear and breakage, but another option is to change the materials of the threading tools themselves. Suppliers have introduced carbide into the tool substrate.

“A standard roll form tap can do maybe 5,000 to 10,000 holes, but with carbide inlays you get over 150,000 holes on steel with only one tap,” says Morrison. “Now these taps may be ten times more expensive than some standard ones, but you’re getting 100 times tool life. With one customer, it was costing him $0.07/per hole and by going with the carbide strip version, the cost came down to half a cent per hole.” SMT