To tap, or not to tap? That is the question

Deciding how to thread a small hole on a lathe or mill was once about as difficult as ordering a sandwich at the local deli. In the pre-CNC and paper tape days, the only choices were whether to use a tension compression or self-releasing tap holder, and determining if a plug tap would provide enough threads. If not, a bottoming tap could be used, even though that meant good thread quality and reasonable tool life might be difficult to attain.

That all began to change sometime during the 1980s as CNC machining centers became equipped with so-called rigid or synchronous tapping, followed by three axis circular interpolation and thread milling. More recently, even CNC lathes have gotten in on the productive threading party, and today virtually all new machine tools have one or both options available. What’s less clear is which method is more effective, thread milling or rigid tapping?

Milling first
As with most things in manufacturing, the answer is fuzzy: it depends. Each technology has its pros and cons, and choosing between the two comes down to what material is being cut, the part geometry and thread dimensions, machine capabilities, and how many holes must be threaded. Jeff Shope, application engineer at Horn USA Inc., offers the following reasons why thread milling might be the first choice on holes 12 mm (0.5 in.) and smaller: 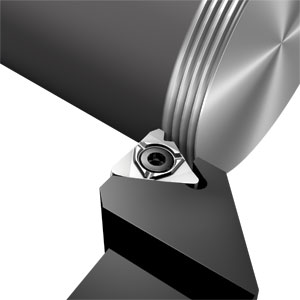 Still, thread mills aren’t perfect. According to Shope, most cutters create high amounts of radial cutting force thanks to their multiple flute design, one reason Horn offers single flute tools to reduce this side pressure. Tapping is also simpler to program (although most CAM systems today offer thread milling routines), and doesn’t require an operator to offset the tool when it wears–just pop in a new tap and go.

For shops that prefer thread milling, however, Shope recommends a precision toolholder to minimize runout. Climb cutting from the bottom of the hole should be performed whenever possible, and arcing in and out of the cut will prevent lines in the thread form. “There will always be a need for taps,” he says. “That said, tooling cost is an ongoing and often confusing issue when choosing between the two processes. High end taps can be very expensive, as are tension-compression toolholders. And a broken tap often signifies a scrapped part. This is not the case with thread milling, where damage from a worn or even broken tool allows the part to be reworked without too much difficulty.”

Plugging plugs
In case you haven’t noticed, machinists have a lot of tapping options nowadays. Most cutting tool manufacturers offer a wide array of point styles, coatings, lengths, and geometries to meet most any thread making need. Marlon Blandon, thread milling product manager at Emuge Corp., points to the company’s roughly three dozen series of extensive tap lineup, each with its own unique sub-groupings and technology, as able to effectively machine whatever material or part geometry for which they were designed.

“The industry has seen a big shift in the variety and difficulty of materials over the years, as well as greater demands on part geometry and throughput,” Blandon says. “Tap providers have responded by offering additional designs that allow companies to successfully thread holes, no matter what the application.”

Some examples include left-hand spiral flute taps that offer freer cutting action in tough materials, taps with modified clearance angles to allow deeper threading and improved chip evacuation, coatings that provide greater lubricity and wear characteristics in titanium, nickel-based alloys, and similar aerospace or medical grade materials, and so on. And for those whose machine tools have the capability, Blandon highly recommends coolant-fed taps.

“If you have coolant through the tool, you should absolutely take advantage of it when tapping,” he says. “However, you also need to pay attention to where the coolant exits the tool–when tapping a through hole, for example, you’ll want a tool with coolant holes in the side, vs. ones situated in the end of the tool for blind hole applications. You’ll also want to use a water-soluble cutting fluid concentration of 10 per cent or higher, or even a neat oil if feasible.”

Sizing it up
Another recommendation is proper hole preparation. Most old-timers are familiar with the rule of thumb for tap drill size, which is to divide 1 by the thread pitch and subtract that value from the nominal diameter. Others use their 21st edition Machinery’s Handbook or the tap drill chart that’s been hanging on the wall for the last 30 years. But as Blandon points out, with the advances in materials and the way tapping products perform now compared to decades ago, shops should always use the most current tap drill values supplied by the manufacturer.

Like Horn’s Shope, Blandon sees both sides of the hole threading fence. “Because you can take multiple passes with a thread mill, it’s a great option for heat-treated materials or ones high in tensile strength,” he says. “It’s also the preferred method for final operation threading, where a broken tap means scrapping an expensive workpiece. It’s not as fast as tapping, so is more suitable for lower volume work, but with that comes greater accuracy and control. And thread milling can produce holes both much larger and much smaller than tapping. We have medical and dental customers, for example, that routinely thread mill #0-80 threads in stainless steel and titanium. I agree that tapping isn’t going away, but thread milling has definitely become a very important machining process.” 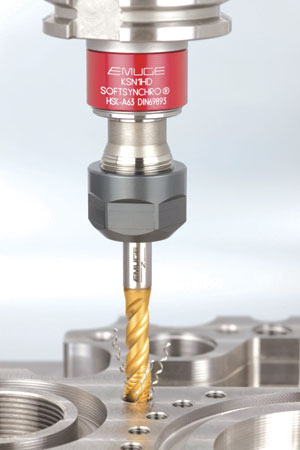 Killing the kickback
Whether gripping a thread mill or tap, using the right toolholder is critical to success. Many shops think that mounting a tap in an ER-style or square shank tapping collet is perfectly fine for rigid tapping, but Alan Miller, engineering and product manager at BIG Kaiser Precision Tooling Inc., says they’re not taking full advantage of their machine’s capabilities by doing so.

“No matter how good the machine tool, there will always be some small amount of synchronization error as the spindle stops at the bottom of the hole and reverses itself, a factor that becomes increasingly evident at the higher surface speeds needed with carbide or very small taps,” Miller says. “We’ve found that with a 1/4-20 tap, for example, there’s around 70 kg (150 lb) of axial thrust at the bottom of the hole. That’s one reason why taps usually break, because of the ‘kick’ as the spindle changes direction.”

One solution is switching to a toolholder equipped with a “shock absorber” that can absorb these forces. According to Miller, BIG Kaiser’s line of MegaEGA Synchro rigid tap holders reduced the kickback in the previous example to just 6 kg (13 lb) of Z axis reversal force.

Emuge’s Blandon agrees, adding that his company’s Softsynchro is designed to increase feeds and speeds in rigid tapping operations by maintaining consistent torque loads throughout the threading cycle.

As for thread mills, Miller recommends either a high quality milling chuck or hydraulic style toolholder to achieve the necessary rigidity and accuracy.

“It’s no different than any other milling application,” he says. “Which toolholder you select depends on the specific material and workpiece, but you definitely need good radial support and minimal tool runout with thread milling.” SMT