Watching a ball nose end mill trace a mould cavity is the very definition of tedium. Back and forth, back and forth, for hour after hour of minimal metal removal and slow but steady tool wear. It’s like watching paint dry. The same is true for turbine and propeller blades, orthopedic implants, forming dies, and similarly challenging, three-dimensional machined surfaces.

Granted, this has been the standard approach for decades, so what’s the use of complaining? For that matter, why change it? Darryl Latoski has answers to both questions. The milling product manager for Iscar Tools Inc., Oakville, Ont., represents one of a growing number of cutting tool manufacturers who have seen the light on circle segment cutters, a.k.a. barrel mills, and will tell you these unique end mills can easily offer a four-fold increase in productivity.

Off to the races
One example of this comes from a well-known Canadian aerospace manufacturer. The company was recently machining a series of engine doors—a part that can best be described as a large aluminum potato chip—on one of its Mazak Variaxis 730-5X five-axis, 50-taper machining centres. Using a 3/8 in. diameter (9.5 mm) two-flute ball nose end mill at a 0.014 in. (.35 mm) stepover, its convex side took 55 minutes to complete. Its opposite side contains a series of milled pockets for weight reduction and was much faster, requiring just 17 minutes using a 3/16 in. (4.75 mm) ball end mill and 0.04 in. (1.02 mm) stepover.

With 146 engine doors on the order, the company was faced with 175 hours of machining time on those two operations alone. They called Latoski. “We have a very good relationship with them, so they were willing to work with us to dial everything in,” he says. “We ended up replacing their ball nose cutters with our Multi-Master lens-style indexable barrel mills and were able to increase the stepover amounts up to three times, saving them 134 hours on that job alone. The results were like night and day.”

None of this is unusual. As its name implies, the flutes on a circle segment cutter contain just that—segments of large radii, some measuring a metre or more across—that make these large stepovers possible. So-called lens, taper, oval, and barrel forms are available, each with distinct uses and each requiring the correct toolpaths together with the right CNC machine tool.

Says Latoski, “there’s no doubt that the programming is a bit more complicated due to the size of the cutter segment relative to the workpiece. Fortunately, Mastercam and Open Mind Technologies and a few other CAM providers now offer this capability. But the machine tool is equally important—you need very accurate motion control in all five axes, along with a decent buffer size and strong lookahead capabilities. Put it all together, though, and you’re off to the races.”

Steve McBride is a senior high speed machining specialist at OSG USA Inc., St. Charles, Ill. Although new to circle segment milling, his machining experience dates back to the late 60s as he watched five-axis milling and CAM systems profoundly change the die-mold and aerospace industries. McBride is curious to see if barrel milling will have a similar effect.

“When we got word on our new barrel and lens product line, I ordered a handful of tools and teamed up with a friend of mine from Gosiger, a machine tool distributor here in Dayton, Ohio,” McBride says. “We sat down, looked at the different cutters, and designed a fairly basic three-axis part that we could use to evaluate the process. The first thing I noticed was how well they cut 50 Rockwell tool steel. The second eye-opener was how large of a stepover you can take without changing the part surface finish.”

As with Iscar’s Latoski, McBride notes that programming a barrel tool requires a different approach. For help, he reached out to Canadian software developer Cam-Tool of Oldcastle, Ont., which specializes in five-axis mold and die work. They supported McBride throughout the testing process, which in this admittedly simple test case, was largely a matter of increasing the stepover amounts. “We went from 0.2 mm (0.008 in.) up to ten times that amount with very little change in surface finish,” he says. “That’s a ten-fold increase. What’s most amazing to me is that it’s taken so long for the industry to develop this technology. It’s a game-changer.”

Old friends
Dan Doiron is no stranger to circle segment cutters. The product manager for milling at Emuge-Franken USA, West Boylston, Mass., Doiron has been helping customers with tool selection and programming questions since 2016. He says the company has the largest selection of solid carbide barrel cutters in the industry and pioneered the technology in close collaboration with CAD/CAM developer Open Mind Technologies, making Emuge-Franken the first to introduce them to the North American market. The company also works closely with Mastercam, whose software supports barrel cutter milling. 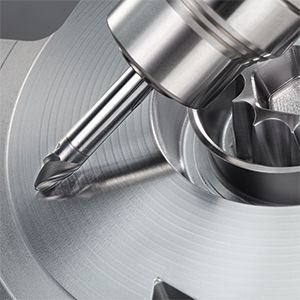 First to the finish line kudos aside, Doiron points out that many shops remain leery of barrel milling, much of which comes down to programming. “It can be both scary and time-consuming to develop new processes, especially if the job quantities don’t justify the effort,” he says. “However, the potential for greater productivity here is so significant, I highly encourage shops to evaluate it for themselves.”

Evan Duncanson, milling application specialist at Emuge-Franken, offers another potato chip analogy. “The parts that work best with circle segment machining are those with large flowing surfaces, kind of like a full potato chip bag,” he said. “Now, crumple that bag up and you’re left with all these creases and tight corners that a barrel mill with its large radius segments might not be able to reach. These complex geometries also make programming more difficult, never mind the fact that you’ll need a machine tool able to drive the cutter through all these dancing movements without hesitating or slowing down too much, which tends to mess up the beautiful surfaces you’re trying to create.”

Despite these challenges, Duncanson notes that the lion’s share of mould cavities, blades and blisks, and many medical components are quite workable. “Send us the CAD model,” he said. “We’ll let you know whether the part is a good candidate, and if so, will tell you what tool we recommend, what cycle time reduction you can expect, and help with the programming if needed. There are hurdles with any new technology, but for the right application, this is one you definitely want to jump.” SMT

Can our tool, die and mouldmakers make the adjustment to an EV-dominated future?